Through The Eyes Of A Virgin

The process of reporting about carnival is a huge responsibility. People read what we write and they make decisions about which fetes to attend, which fetes to avoid and what they should expect at carnival.

Every year that I attend, I see things differently than I saw them at first. I learn more, I experience more and I feel more.  I also, unfortunately, approach things with a hint of cynicism and disdain because I want it the way that I want it.  My previous experiences create mental expectations that, often times, the reality cannot and does not meet.

It’s like the building of sexual tension between you and another individual and then when the act happens it is unfulfilling. Not because sex itself is unfulfilling, but the expectation that you had of the experience did not match the reality.

See, your first time in Trinidad is impossible to mess up. Because no matter what you think, dream or imagine, Carnival in TNT is not only going to match it. It’s going to BEAT IT!  Severely!

But once you’ve gone it’s a little bit different.

Look, if you are in a relationship and you and your partner are both virgins and it’s the "first time" for both of you, then you have nothing to measure it against and it’s THE BEST EVER.  But if you’ve had a plethora of experiences then you start to compare one experience with the next one and then compartmentally each experience starts to become “the best” of it’s own category.  (i.e.  She gives the best ****. Or he ***** me the best. Or he goes ****** on me the best. Or she ***** my ***** the best. etc.,.)  (and uh….. shame on all of you if you could fill in the blanks!! LOL!!)

But the truth of the matter is that we bring that sufferation on ourselves because NO TWO PEOPLE ARE ALIKE and comparing one against the other is not fair.

And likewise, comparing this year to last year or 2 years ago is not fair. Or comparing the music.

This year on the road, I spent the majority of my time by myself and I enjoyed it.  I had not done that previously. I also played mas from early morning until late in the evening and found other trucks to jump behind when my band stopped.  I also played J’ouvert early and did some things differently.

It’s so difficult to compare.  And for a moment, I was looking at carnival through the eyes of a veteran and not putting on my virgin lenses.

I was comparing and contrasting instead of receiving and enjoying.

I found myself questioning the music selection of the DJs instead of allowing myself to get lost in the music.

I was getting upset about the bar truck not having anymore coconut water instead of just chipping to the next truck and being thankful that coconut water was just a few paces away.

I was making the mistake that many make at carnival.

I WAS BRINGING THE WRONG VIBES TO MY EXPERIENCE.

You see, the vibes are not brought to us, THE VIBES ARE BROUGHT BY US.

I will write that again…. THE VIBES ARE NOT BROUGHT TO US, THE VIBES ARE BROUGHT BY US. So if you ever find yourself saying that the vibes are low, YOU and you alone can fix that. You have you and your crew. You can fix that immediately. And vibes are infectious. Once you tun up, de whole place tun up.

Because a music truck blasting music with no people around it is just a music truck. When people get around the truck, that is when the vibes are measured. It is because the people and the people alone bring de vibes.

Here’s what I know. 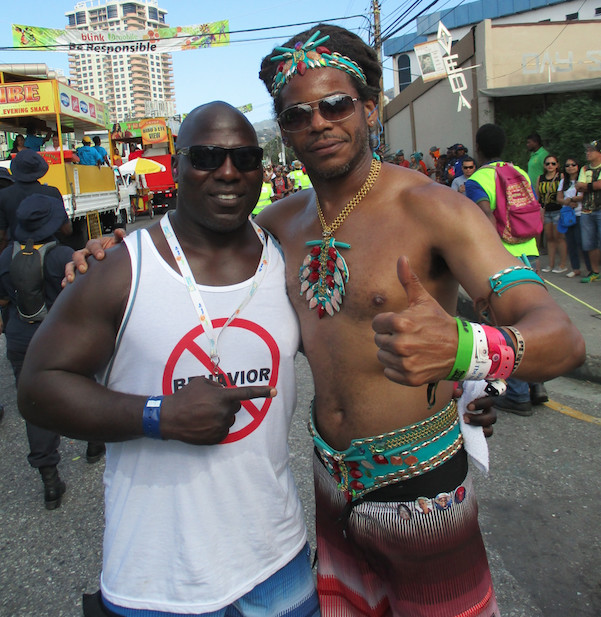 He was on the road early on carnival Tuesday and we shared a moment and I think we got a better understanding of each other. And I think we were doing the same thing.

See, my boxing coach died at the end of 2015 and I had some other losses in my life most of us do during every year.  So on Monday night when I went to sleep, I told myself, “Cut the sh*t!! Carnival is a celebration of life. You are living!  We not complaining!!!!”  So when I woke up on Tuesday morning, I got up and got dressed.  I put on my virgin lenses and I ate my breakfast with Tribe and I chipped and wined down the road by myself for a few hours. And I just reflected and cried and enjoyed myself.  Then I ran into Ivan and he hailed me down and we rapped for a moment. He said, “I’m sorry about the loss of your coach.”  I told him thanks and I was a little overwhelmed and sad because I miss my boxing coach, Howard Davis, so much that it’s just unfathomable to think that he’s no longer with us. But his lessons on boxing on life are with me.  So when Ivan say that, I tell him, “Thanks.” And then he show me his pants.  And on the left side of his pants he had 4 buttons. They were photos of all of the people that he has lost.

Look here.... in the morning....... when the road is not full, this is the time when you can reflect and actually jump and wave with the people who are not here. You can remember them and enjoy their presence in your mind and think and reflect.  See early morning mas isn’t about throwing a wine. It’s about enjoying your time.  It's some alone time on the road.

I saw DJ Private Ryan at 7:45am leaning against the wall on the side of the road just enjoying himself. This was his time. The time when he could actually enjoy carnival, the music, the road and the moment without all he hustle and bustle on the DJ truck trying to engineer the emotions of the crowd.  He could simply be, Ryan. And when I saw him, I recognized this and I did not bother him. I saw him. He saw me. We acknowledged each other’s presence and kept it moving.

I know many people like to hit the road at 11am or right before lunch.  I know the ladies like getting their makeup done but look here — Get Out On The Road Early and see the carnival through the eyes of a virgin.  Remember how you were in your first year. Remember how excited you were.  You can’t recapture that moment, that’s impossible. Nor can you relive it. But you can RESPECT IT.

And looking at carnival through the eyes of a virgin is the most respectful thing that you can do for your carnival experiences and that of others.

My football coach used to say that the most special thing about a game or moment is that these people that you are playing with, you will never be with this same group of people again. And that is carnival.  Out of all the people that you played with in your band or during J’Ouvert or inna fete, those same people will NOT be here next year.

Some will no longer be on the planet and that is just the mathematics of the situation. Every year, it’s different. Every year some people are dealing with different issues.

There are some people who came to carnival THIS YEAR, who are dying and they KNOW for a FACT that they will NOT make it to carnival next year.  You may have run into this person talking about how you don’t like the music this year.  HEY, F*CK YOU!!!!! THEY DO NOT WANNA HEAR THAT SH*T!!!!

There were some people at carnival who LOST THEIR JOB RIGHT BEFORE CARNIVAL during the planning of carnival. They have spent money that they don’t have and refused to cancel their trip because they want to enjoy a small piece of life because the reality of going home is sad. They don’t want to hear about you complaining about the truck moving too fast.  F*CK YOU!!!! THEY DO NOT WANNA HEAR THAT SH*T!!!!!

There were some people at carnival who have really bad relationship problems and they KNOW and KNEW that going to carnival would probably be the straw that was going to break the camel’s proverbial back and your @ss is turning around and screwing up your face while you are hanging on the back of the f*cking music truck when they wan take a wine!!!!! F*CK YOU!!!!! THEY DO NOT WANNA HEAR THAT SH*T!!!!!!!

Let me deal with this sh*t right now!!!

Do NOT GRAB THE BACK OF THE FLICKING TRUCK IF YOU DOH WANNA WINE.  I seen plenty woman grab de back of de music truck and then when man wan take jam they pushing he off and looking back with they face all screwed up.  EH EH!!!! F*CK YOU!!!!

If you don’t wanna take jam, haul YUH MC to the middle of the road wit everybody else.  That space on de back of the truck is fuh pure winers alone!! If yuh nah wan take jam, move to the side of the truck. You don’t get to hold on to the truck and bend over so and nah take jam. MOVE OUT!!!!!!

Take a look around you and take it all in.

Understand that everybody that is with you and around you is dealing with real life that they have to go back home to. Understand that this time that you are experiencing is a blessing and there are people in hospital rooms and nursing homes that would live for this moment that you are having right now.  And they would look at you complaining about there being more coke than rum in your cup or the same song playing or your costume not fitting exactly right as being so small that it’s not worth the time that it would cost to say it to even mention it.

Once you touch down in TNT, you are on a running clock.

You are there for a finite piece of time.

Try to spend some of that time looking at carnival through eyes of a virgin.

Each and EVERY carnival virgin that I spoke with said that this carnival was the most amazing experience ever. They said that they loved it and would love to do it again. Not one person said anything outside of that.

With that being said, this year’s series of reviews which will be in multiple parts, will look at carnival through the eyes of a virgin but I will write with the experience of a veteran that leverages the experiences of other experienced veterans.

Thanks for reading and please look out for the next recap article called, “The Carnival Doctor’s 2016 TNT Carnival Review Part Two - The New Anatomy Of The Fete.”

P.S. Get Your Copy Of The Ultimate Road Ready Guide today!! “The Only Book That Will Ensure That You Have The Best Carnival Experience Ever!”