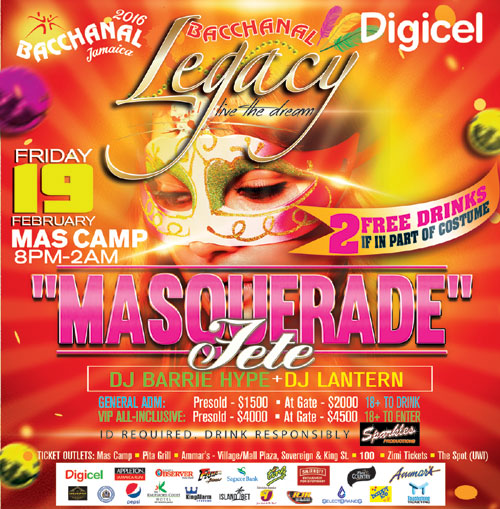 Masquerade is the theme for the next Bacchanal Friday when revelers are encouraged to wear a piece of costume from a previous carnival. Patrons with general admission tickets, who are wearing costumes, will be rewarded with two complimentary drink chits for Appleton and Smirnoff upon entry to the Mas Camp. Charmaine Franklin Bacchanal director explained that, “It is all part and parcel of the Legacy theme and looking back at the past. Masquerade was a theme we enjoyed portraying as people immersed themselves in the revelry and played in their favourite costumes from previous carnivals.”

Barrie Hype is coming to Jamaica fresh from Trinidad carnival. Some fans will remember that he was awarded Soca DJ of the Year in 2010 at the second annual South Florida Dancehall Awards.

Barrie has immersed himself in music since age seven and prides himself on being one of the few internationally recognized DJs/MCs from Saint Lucia.

A true Caribbean man he migrated from St Lucia to Barbados to go to college and further continued his studies in Montreal where he attended Full Sail University, one of the world’s premiere art, music and film schools. There he majored in show production, concert touring and recording arts. Barrie is considered to be among the few DJs/MCs to master the art of simultaneously DJ’ing and emceeing a show. He now resides in Miami, Florida.

Jamaican DJ Richie D has been DJing for over 20 years and is now recognized as one of the biggest DJ/Producer/selectors in Fort Lauderdale, Miami area. He travels the world to employ his skills with Jamaica being a favourite stop. Although he entered the industry as a DJ, he explored the production side of the business and established the Too Bad label. He took a break from production but is now back in the studio writing and producing.

“It is our intention to use bacchanal Jamaica as a platform to expose Caribbean musicians whether they reside in the region or in the diaspora, as well as form a bond among the fraternity, thus opening up more opportunities for collaboration and greater creativity. In keeping with that we will be bringing soca, reggae, dancehall musicians from across the world to the Jamaican stage”, noted Charmaine Franklin.

Tickets for Bacchanal Fridays are on sale now at the Mas Camp, Pita Grill as well as the Ammar's Village/Mall Plaza, Sovereign and King Street locations. Tickets are also available online on www.touchstoneticketing.com. Ticket costs are $1,500 pre-sold, $2,000 at the gate for general admission, and $4,000 pre-sold and $4,500 at the gate for the VIP which is all-inclusive. Special rates are available to current UWI and UTECH students. Patrons must be 18 and over to enter VIP. Visit www.bacchanaljamaica.com for more details.