Saturday afternoon now stands alone as the time slot dominated by DJ Private Ryan’s Soca Brainwash.  The most versatile DJ in the world has now fully solidified himself as far more than the powerful man who seamlessly handles musical flow & transitions behind the turntables, he has one of the most sought after fetes in all of Trinidad Carnival season.

The impact on the experience can be felt before you ever enter the fete.  In an era where many find it next to impossible to get access to tickets and attempt to find what back channels could possibly lead to getting a unicorn ticket from a committee member, Ryan made it as fair as possible for any Soca lover to be in attendance.  He literally announced the day & time on his social media platforms of the online release of the 1st batch of tickets – which was sold out in 8 minutes!  He did it again a few days later and bam, there you go – the absolute fairest method of release that ensured that as long as you had an internet connection, fast fingers & a credit card you were good to go no matter where you were in the world or who you knew/didn’t know. 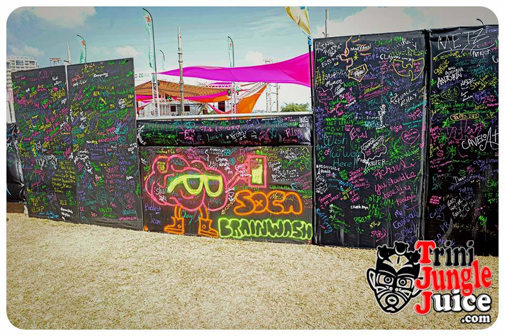 Soca Brainwash has taken concepts of color, pageantry, combined with the idea of appealing to people feeling a part of the overall experience in ways that you don’t routinely see in fetes.  This year's theme was "Friends United in Numbers" - F.U.N. Whether it was the “fun zone” (with a monster game of twister, jumbo jenga, hula hoops & beer pong) and a graffiti wall of sorts inside the entrance designed to be an opportunity for signing in/creating a tag message by attendees to leave their mark, you had a chance to do something you don't ordinarily see/experience in a fete and yet it all tied in really well and made sense.  Everything was well thought out & organized from start to finish ....and when I say start I do mean all the way at the beginning of online ticket announcement & then release.  Even the wristband was clearly well thought out as I truly have never received a neoprene wristband that serve as a true keepsake - the attention to detail was truly impressive.  It's as if they had "leh we make a memory" in their heads on replay during the strategic planning meetings. 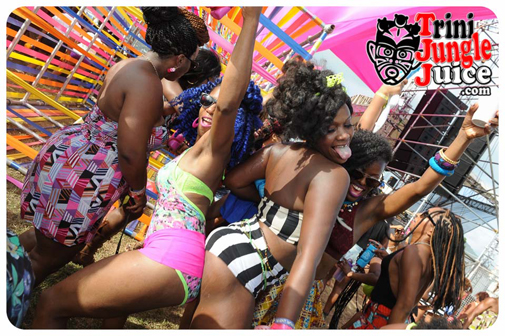 It’s remarkable when other international event promoters compliment Ryan and his team for taking the time & consideration to create a true “experience” from the moment you enter to the colorful tapestry that both sets a mood and serves a purpose to provide a shaded gathering space front and center to concentrate the energy/vibes.  Later as the energy has been pumping at a stratospheric level for hours there was a release of a sea of balloons, confetti, and smoke machines blasting away as yet another indicator of what this fete encapsulates - a euphoric celebration of life & Soca - in an incredibly memorable setting. Ryan serves as an appreciative & concerned host, interacting with attendees both being happy to take pictures with whomever asks, checking to ensure they are enjoying their experience, and thanking them for attending.  This bit of hospitality & humility should be commended in an era where a personal connection and level of appreciation for the clientele is not always at the forefront. 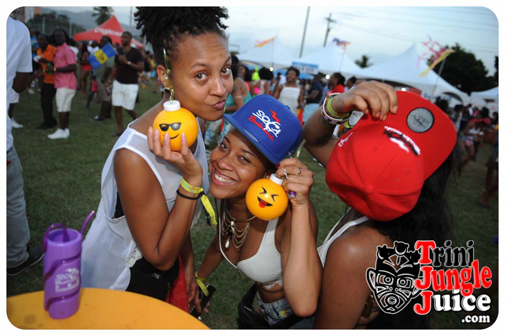 The food selection included both local & international cuisine and they’ve clearly learned from previous years as it lasted late into the evening.  The modest modification they may consider is the number of bartenders as the fete went on the wait for drinks increased at the main bars essentially when both attendance & vibes were at their peak - truly only at the peak of the fete, but that's truly nit-picking and it was still a shorter wait than many other fetes I attended (plus you still had shot girls, promo bars, etc that had no real wait ever if you wanted to utilize those options). There are no pretenses, this isn't for posers or stush crowd, this is for SOCA LOVERS.  It didn't matter if you wanted to Go Hard in front of the stage or relax on the outskirts, you were gonna experience VIBES

Whether at Soca Brainwash in Trinidad or foreign what is obvious is the level of respect that DJ Private Ryan has among his peers and their desire to be a part of the line-up.  It’s called “Soca Brainwash” for a reason as musical artistry is front & center all day.  Heavy hitter after heavy hitter among the DJ community was there (Nuphoric, DJ Stephen, Barrie Hype, Ryan Sayeed, Back2Basics, DJ Hazzard, Riggo Suave), finishing out with Ryan himself accompanied by Walshy Fire & Kes coming in for a live performance. The extra attention to details – the massive release/showering of balloons, the fog machines just took it to another level, but what truly was the culmination of a Soca music lover’s dream were the last 5 minutes.  Ryan announced they were giving him only 5 more minutes before being shut down, so he wanted to see how much Soca he could fit in.  For those who grew up on dancehall mash-ups with no more than 20 second snippets per song, Ryan gave a throwback of similar style but with a mash-up of the latest hits mixed in with a few classics.  It was at this point that I reached euphoric bliss, surrounded by all meh frens & dem. That last piece .... being surrounded by friends, “framily” & strangers that feel like long lost friends – it’s a special feeling, not often truly achieved in large fetes.  That sense of familiarity, bliss, and shared vibes celebrating life, Soca & all thing Carnival could definitely be felt hour after hour.  If you are a true Soca lover – Soca Brainwash has to be on your MUST ATTEND fete list - point blank you're crazy not attempt to get in on the epicness of this fete.  Whether it's with his mixes or with his series of Brainwash fetes, Private Ryan is guaranteed to deliver a quality experience. Stay tuned for the next installment of Trinidad Carnival 2016 review – Vale Breakfast Fete.

‘Til Next Time – Soca to De World,
Jouvert Mike

This article is part 6 of a 8 part series. Other articles in this series are shown below: