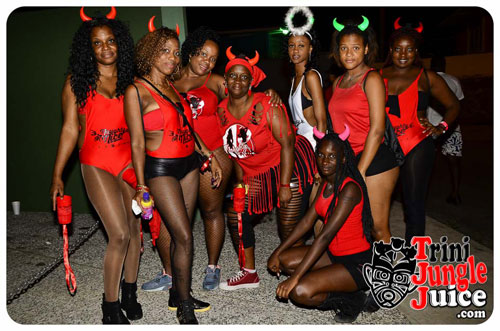 Another year... another carnival... another J’ouvert? Why not partake in a different experience and break the routine? That’s exactly what I did for the 2016 installment of Trinidad’s J’ouvert celebrations. I found myself returning to St. James, this occasion to participate with the Naughty or Nice J’ouvert band. As the name clearly suggests, revellers had the option of naughty or nice colors, red or white, but certainly had no meaningful indication of one’s ultimate road behaviour!

I arrived at band headquarters at Isaac Terrace and Bournes Road, a little later than planned, as there was every intention to experience as much as possible the two hour pre-road breakfast lime. Nonetheless I was still afforded adequate time to fuel my body for the road, courtesy a generous helping of doubles; my food of choice. What exactly constituted a generous serving you ask? Well, you can use the figment of your imagination! I assure you my fellow masqueraders were indulging just as well; just saying. For those who were already filled, or preferred beverages, were fuelling themselves with the abundance of liquor. Rum, scotch, vodka, hennessy…you name it, all the premium drinks were available, and as the saying goes, “pick your poison.” I settled for government juice, and if you never heard of it, Google it!

Now ready for the road, I made my way to the music truck already on the move heading south on Bournes Road towards Western Main Road. I was taken aback and pleasantly so, and commend the band leaders for arranging the number of band security personnel as evidenced; not something I typically notice or comment on, but these were clearly visible.

With music blaring, everyone pumping, the festivities were soon in full gear. Keeping the vibes going throughout were several top DJ’s, Selector Kerdel, Anwa D’ Juggla, Jugglers International, and hosted by West Indian American comic and entertainer Majah Hype. If you don’t know Majah Hype, Google may again be your best friend.

The vibes soon turned up a notch with the introduction of the bottled paint. Friends were squirting friends, band members and strangers alike, no one could escape, not even law enforcement. The police jeep coincidentally and conveniently parked on the corner of Coronation Street and Mucurapo Road as the band made its turn from Western Road Main suffered that faith. What is it with the police that bring out the “best” in revellers during carnival? You know wining on the police is always a tradition too. The policeman on duty seemed not too thrilled and quickly scolded me during my attempt in capturing the memories of the now multi-colored police vehicle. Pleassseeee.... Mr. Officer. 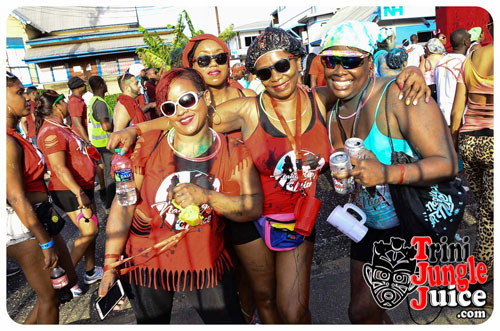 It was now dawn, and with the sun blazing, the pumpments did not cease…the water truck was now out in force, and many found themselves taking a cool down, or what could perhaps be described as a mini-shower for some. One reveller was also exuding such joyous exuberance by rolling on the road in full glee; and wait ... what’s this? Is that a pre-teen male with immense concentration, giving a serious gyration to a much older female counterpart? Honestly a very diplomatic description, but let’s leave it at that shall we?

There were also live performances by a few soca stars including 5Star Akil, who gave a rousing performance to a delighted crowd singing many of his hits, including what had to be this year’s favorite “Different Me.”

After a short “truck-off” with another band that was heading in the opposite direction, the festivities were on the last leg and the band began its final stretch back to base camp. Before you knew it, another J’ouvert was in the books; what an experience.

If you thought that was a wrap, you are mistaken. Did you overlook the post-road cool down? Shame! Now at headquarters, band members were treated to bake and shark and of course corn soup is a must! With the music truck now parked, but music once again cranking, the water truck still pumping, drinks still flowing, last lap was in effect.