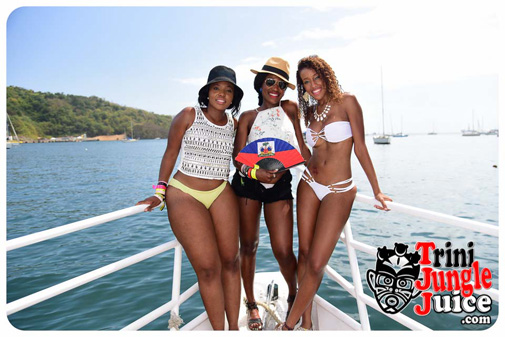 Au Revoir was originally going to be a group of about 30 friends headed to DDI on a catamaran looking to avoid the hustle of flights at Piarco on Ash Wednesday.  Instead as interest grew, the BPositivo team shifted course and hired the Embassy TT, a much larger party boat with a capacity of 250 passengers. The motto of B Positivo is “Live Passionately” – essentially live life to the fullest & make the most of every moment you can each and every day .... and they definitely did that at Au Revoir.

With about 150 attendees it was perfect – small enough to have a strong friends & family vibe, yet big enough to have plenty vibes and new bumpas & fenders to wine on ....and I do mean WINE.  Whether using railings, coolers, speakers, or your bredren – people had plenty leverage in effect for optimal wines. 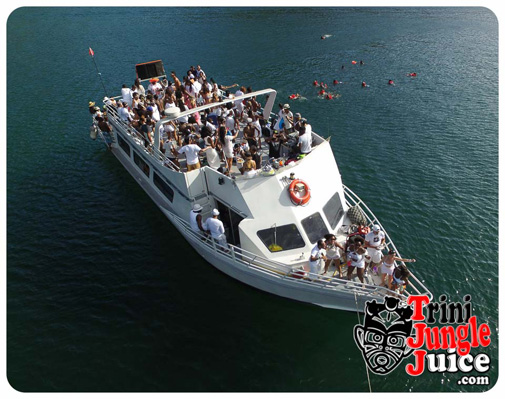 There was even some acrobatic wines .... people going inverted hanging from overhead supports – it started to look like a mash-up of Cirque De Soleil, Soca Junkies, and rum which lead to some shall we say memorable moments.  What’s hilarious is that the vast majority of these no behavior having feters are actually accomplished professionals – doctors, lawyers, business owners, civil servants, etc. .....but those responsibilities were left at the dock & they let loose like there was no tomorrow.  How many times have you seen people wining hanging off the side of a boat while others are finding a way to wine IN THE WATER, as even more are wining on both decks? Slackness on some next level ish……absolutely hilarious. This cooler cruise had Trini & Jamaican DJ’s pumping Soca (Richie Ras, Hazzard, and S Bangs), a long swim time in Scotland Bay and food.... lots and lots of food lol.  The catered food was much like a Trini Sunday lunch of stew chicken, stew pork, baked fish, veggie rice, salad & provisions. It was Ash Wednesday so some skipped the meat while others, like myself, went ALL THE WAY IN because Carnival body was no longer necessary – it was the first true cheat meal/day.  Later in the evening beef, chicken, cheese and fish pies & near the end when it was guaranteed to be safe closer to port corn soup was served – I can’t confirm or deny having 4 cups of corn soup myself.....I mean it was obvious that B Positivo wanted to give attendees one last taste of Trinidad before we all parted ways & headed home – so I want to get every piece of flavor I could before having to head back to the US.  The service was professional & consistent all afternoon/early evening, as my inner fat kid was happy all day long. Originally, the cruise was scheduled to begin boarding at 12 pm and sail from 1-5 ....it’s Carnival season so no real surprise boarding started at 12:30 and departure was delayed a bit as there were some hiccups on the delivery of all the needed chasers & ice supplied by B Positivo – so the boat sailed at 1:50.  The good news was attendees got not just the 4 hrs promised on the water, but actually more like 5+ hrs as we partied past sunset and reached port at 7 pm.  I mean, who’s not happy about an extra hour of pumping when you know there’s nothing to get back to that night and it’s your last official fete of Trinidad Carnival? For something that started as a simple friends get together it evolved into a series of small unexpected surprises – whether the branded sunglasses, thermal sensitive color-changing cups, extra hour of swim time in Scotland Bay (I’m part man, part duck – so any time to lime in the water in always appreciated.  On the ride back to port there were a few truly memorable events – some planned & another impromptu.  As sunset approached white balloons & sparklers were presented for everyone to enjoy and release.  There was something innocent and nostalgic in the process, somewhat of a farewell not only to the day but to the Carnival season. While everything I’ve mentioned above could have been experienced by many feters on a number of different cruises during the Carnival season, what happened next was truly unique & fostered in this particular environment with such supportive and welcoming people.  As we often do people repped their island with flags & got excited as songs from artists from their island played they pumped a bit harder, one reveler shared that she was Pakistani.  At this point the B Positivo family took it upon themselves to let the DJ know, have him find a song representing her heritage, and as people circled around she led the way with a dance that everyone was more than happy to participate & celebrate her in the process.  It was truly something special to see how so many people organically came together to welcome & celebrate because while we often do that Soca around the clock, it’s truly what’s in our blood as Carnival junkies to seek a special place of euphoria where all walks of life are welcome, accepted and appreciated – it’s the beauty of Carnival. As people departed you had plenty saying they were bringing their friends for 2017 .....so this may be a 2 boat fete if they keep this pace.