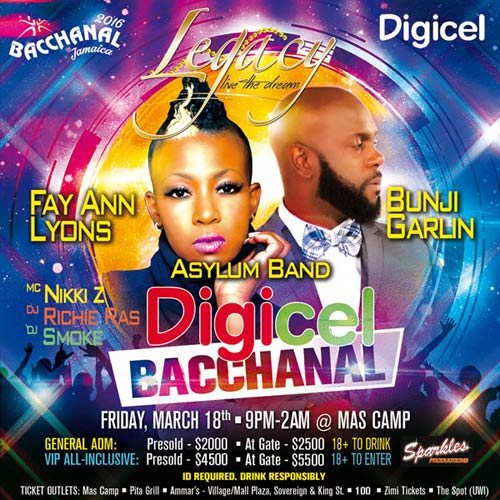 The royal couple of soca, Bunji Garlin and Fayann Lyons, will be back on the Mas Camp stage for the final Bacchanal Friday on 18 March 2016! Favourites of Jamaican soca fans, the dynamic duo is guaranteed to raise the excitement level by several bars as they get pulses racing, feet stomping and waists wining. The couple has been very busy since their show stopping performance in Jamaica for Bacchanal 2015.

Bunji Garlin is a featured artiste on the track ‘Jungle Bae’ from the album, titled Skrillex and Diplo Present Jack Ü, which won the Grammy for “Best Dance/Electronic Album” at the 58th Annual Grammy Awards in February. He received a shout out from Diplo and Skrillex in one of their thank-you speeches. “Jungle Bae” boasts an electronic fusion of beats that’s high energy and up to February had amassed over five million YouTube views.

Fayann Lyons  collaborated with dancehall star, Mavado, to write “Bad Rule” which was produced and mixed by Stadic Music and mastered by Franklin Rodriguez. This should capture the imagination of the Bacchanal crowd as it is about the girls that don’t hold back from enjoying themselves and making the crowd go crazy when they go out to have a good time but, at the same time, understanding the limits in which they operate. As the line says ‘bad to the bone but we ain’t no fool’. This is Mavado’s first appearance on a soca type track.

The couple also teamed up with Mavado  last July to present what was billed as the BIGGEST Summer Event in Grand Cayman…Performing Live! International Dancehall and Soca Superstars: Mavado, Bunji Garlin, Fay-Ann Lyons”. When in Jamaica last, they had declared their intention to diversify their product, collaborate more with artistes from other genres and, generally, spread their wings. They have succeeded in doing just that!

Priming the revelers for Bunji, Fayann and the Asylum Band will our favourite soca DJs – Smoke and Richie Ras. MC Nikki Z will be holding the show together.

“Friday promises to be a night of high energy and intense vibes and outstanding performances. Apart from what’s happening on stage our lead sponsor Digicel will be bringing their special flavour to the fete. Our final Friday always delivers and this one will be no different” said Bacchanal director Charmaine Franklin.

Tickets for Bacchanal Fridays are on sale now at the Mas Camp, Pita Grill as well as the Ammar's Village/Mall Plaza, Sovereign and King Street locations. Tickets are also available online on www.touchstoneticketing.com. Ticket costs are $2,000 pre-sold, $2,500 at the gate for general admission, and $4,500 pre-sold and $5,500 at the gate for the VIP which is all-inclusive. Special rates are available to current UWI and UTECH students. Patrons must be 18 and over to enter VIP. Visit www.bacchanaljamaica.com for more details.