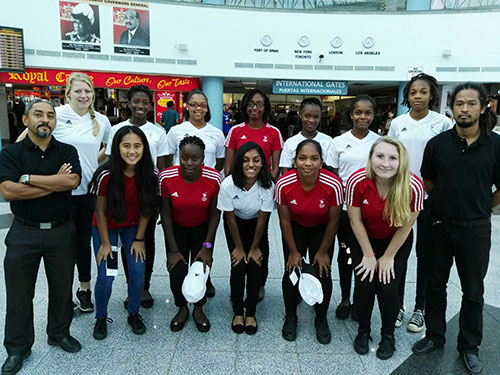 Port of Spain, April 8, 2016 - The Secondary School Rugby League is pleased to announce the departure of its developmental girls ALL STARS TEAM to Barbados for a short tour during the period 8 -  10 April 2016.  The All Star Team comprises twelve (12) of the best athletes of the 2015-2016 Girls Tagby League competition.  Three officials/coaching staff including Team Manager Kwanieze John.

The squad, selected from an original group of thirty (30) girls, has been in training for the last three months with a regime that included high performance training with specialist coaches and trainers. The main goal of the developmental team is to provide the preparation for the next level of the game and introduce the players to contact rugby and encourage growth of the game among girls and women across Trinidad and Tobago.

The All Star team will play a mini Rugby Sevens tournament against two competitive youth teams from Barbados’ Secondary School system and a Barbados select women’s team at the Garrison Savannah.

“I got involved with these girls a little over 2 months ago and have focused mainly on developing the micro skills associated with catching and passing which are key elements to the principles of play in the sport of Rugby.

- The outcomes I will be looking for during this tour are:
1.    Their ability to adapt and apply new skills and concepts that they have been taught.
2.    Their ability to play and act as a TEAM
3.    To push themselves beyond their comfort zone both on and off the field.

I believe that if these are achieved, the tour and its peripheral objectives would have been met.

- HEAD COACH Nicholas Martinez
The tour has been funded and supported by the Schools Rugby League, the Sport Company (SPORTT) The Olympic Committee of Trinidad and Tobago, Aldoz Investments, A’s Travel Services and the fund-raising activities of parents.

If you would like more information about this topic, please contact Kwanize John at 1 868 382 5570 or email at rugbygirlstt@gmail.com.

*Denotes individuals are recent past students of their respective schools.