Girls Rugby All Stars Win All Matches On Tour Of Barbados 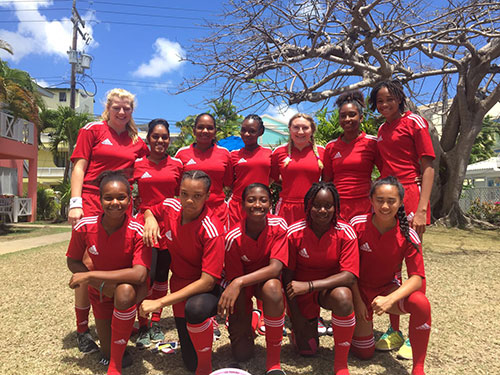 Port of Spain, April 11, 2016 - The Secondary School Rugby League is pleased to announce the safe return of its developmental girls ALL STARS TEAM from their tour of Barbados.  The All Star Team of twelve (12) athletes were outstanding in all three games at the Garrison Savannah, competing in a Rugby Sevens tournament.

The team, coached by Nicholas Martinez, was very well organized offensively and defensively as they routed their opponents by large margins and limited their scoring to five points in each game.  They won the games as follows

The team management is very proud of the outstanding performances of the girls’ team in their first competitive outing and the coming to fruition of this historic and ground breaking tour.  The team’s first focus was application of their skills learnt over the last few months. The team was very focused and played well in all three games.  We are pleased as well that there are no major injury concerns and they feel a great sense of pride from doing well. We believe that this is a great foundation to build future girls teams and more so it is a great promotion for the sport of rugby for women in Trinidad and Tobago and the region.

The tour management expresses its profound gratitude to the following who have funded and supported the tour -  the Schools Rugby League, the Sport Company (SPORTT), The Trinidad and Tobago Olympic Committee, Aldoz Investments, A’s Travel Services and the parents of the athletes.