If Cocoa Devils team said they were going to move Trini Jungle Juice's staple Carnival Friday Bayview event from Maracas Bayview to any other venue that would seem like event suicide right? Eeeeeappppp... WRONG.  The team has done it again, leaving only two words to drop out of my jaw, "Faultless Precision". This event still has the pore raising stuff that makes adults giddy like children on Christmas day. We have injected TJJ most jaded core road team into this 'unicorn ticket' cooler party to see if we can all agree.  We all shout together and in unison a "must do" event! We have made this a staple on our calendars since 2013 and this will continue in 2017. #DoNotMissThisParty

We have explored this party for the last four plus years and it is consistently excellent.  Human language is far to simple to describe the all the feeling conjured in this bigger and breezy new venue (now named Bayview although it is not), and it is impossible to explain in words of a review how this event makes you feel as someone who has grown up in Trinidad. The solution to any successful event starts from the actual crowd.. Bayview, "How do you possibly find all my childhood friends and put them all together in one party??!!"

And yes Toni S., we're still referring to girls as "smallies" :-) The only thing that has changed is we have earned the esteemed reputation as 'Party Gurus', 'Carnival Connoisseurs' and 'Documenters'.  This year we're going to describe this from the eyes of a photographer navigating the oblique crowd that is nothing less of mature, chic, attractive and sociable! What makes this party unique and in a class by itself is the crowd of rainbow diversity all blending together like the swirl of ice cream - regardless of age, creed or race, we are all one in this party.  It is unique to parties yet common place in Cocoa Devils to hear a mummy say, "Take a picture of me and my daughter." That speaks volumes to the bonding power of this party with generations parting with future generations and everything in between. 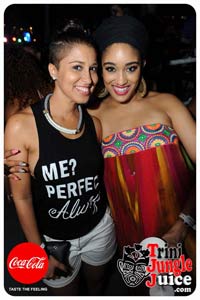 Patrons attending are almost 80% to 90% repeats, and when we see new faces its usually because they are foreigners with a really solid link or new main local squeezes. Whatever the reason, it has no impact on the scene at all. Drinks still pouring and the vibes are on point!  I am going to bet my lucky 100 dollar note that crews who were in a spot / location this year will be back and in the SAME spot in 2017. Talking about the same spot, one thing we liked about the new venue is that it stays true to the original undulating levels and water-front view as it predecessor Maracas venue.

Recession, what recession? This is what we like to call a "Forget Your Problems Event"!! How do I walk out this party in a euphoric bliss and not score this party at anything less than 100?  I personally want to give you more than 100!!  Bayview Cooler Fete AS ALWAYS defies comparison to anything but Bayview Cooler Fete ... itself.  The new venue is fantastic and will allow your team to facilitate more fans of the event than in previous years.

- Stephen aka The Original Lime Flavor