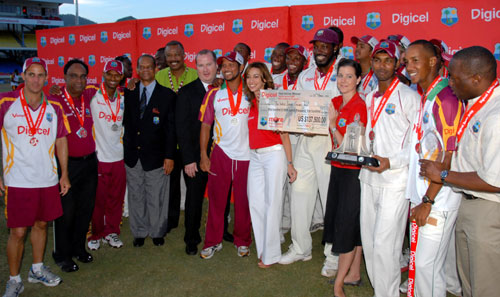 As a reward for their exciting win, Digicel, at the end of the Digicel Test Series, presented the West Indies players with a bonus cheque of US$137,500.00.  The bonus falls under Digicel’s sponsorship agreement which states that the Windies players receive a bonus once they win a Test Series and they also receive an additional bonus depending on the rank of the team defeated.

Kieran Foley, Digicel Head of Group Sponsorship, expressed Digicel’s excitement at the long awaited Windies win: “It is a nice feeling to be in the position to make such a large bonus payment to the West Indies players to recognise their fantastic achievement in winning the Digicel Test Series. It has been a long time coming.

“The excitement from the manner of the win in the 1st Digicel Test, to the anxious final moments of the 5th Digicel Test, ensured the West Indies fans were kept on the edge of their seats right up until the final moments by Chris Gayle and his charges!

“Digicel is delighted to continue to support the players.  In the same way we make the Digicel Series as interactive and accessible as we can for our customers and all Windies fans, we equally ensure the players get bigger and better results with more than the match prizes to recognise their fantastic achievements."

West Indies Captain, Chris Gayle, expressed his appreciation for the bonus: “We are very thankful to Digicel for this bonus.  The team worked very hard for it and it is much appreciated.  We hope that this is the 1st of many to come.”

The West Indies now prepare for the Digicel Twenty20 match against England on Sunday march 15 at the Queens Oval Park in Trinidad.