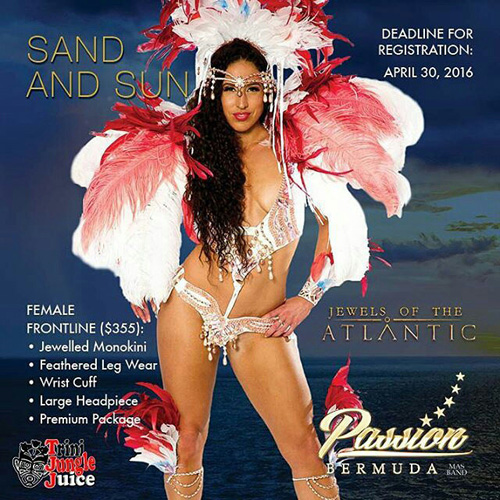 Before we reached parade we had to make a stop at a gas station for food.  By the way if you haven’t gone back & read articles in preparation for your Carnival trips you’re doing it wrong lol.  There’s so much great information out there to help us all prepare & this being my first trip to Bermuda Heroes Weekend I went back on TriniJungleJuice.com to read The Carnival Doctor, Rhadi Ferguson’s articles from BHW 2015.  So, I wasn’t stunned or cringing at the idea of gas station food – it actually was the best meal I had in the first few days and the most affordable too.  Hell, we went to a formal restaurant, a jerk spot, and yet when we were done feting or reached back to the hotel the running question became “I’m hungry, where’s the closest gas station?” 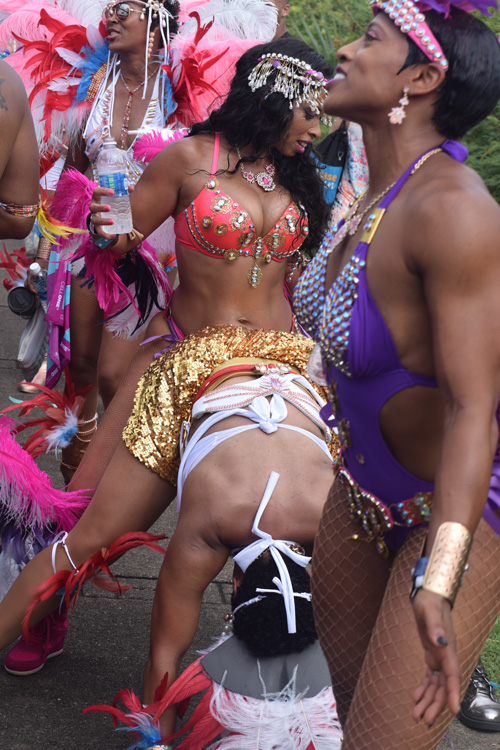 Bermuda Heroes Weekend Road March, TJJ partnered up with Passion Bermuda for a section in the band.  This year was a new extended route, roughly 6 miles long running alongside the airport.  Sorry, we planned to have incredible drone coverage by Lee Quest for all of you .... But funny little thing – FAA regulations & computer chip safety guard inside drones won’t allow civilians to launch a drone in restricted airspace.  I’d say that’s a good safety precaution for everyone’s peace of mind when they are flying, so the still shots & video from the ground will have to do for allyuh this year – or maybe just tease you enough to join us on de road next year. 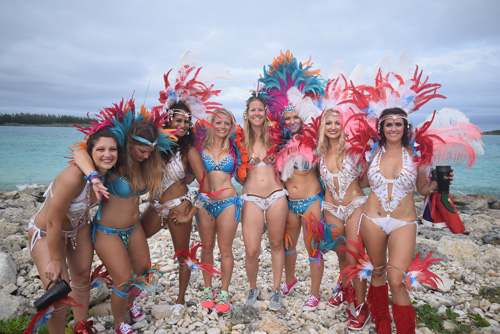 This was the most picturesque road march I’ve ever participated in with views of the ocean on both sides as you come around bends and corners.  The march literally ended at Clearwater Beach – I mean incredibly beautiful picturesque views, gentle breeze, sand, hint of saltwater in the air – it is what so many of us love about island life (a couple of people mentioned Cayman’s route but having never been it’s just another reason for all of us to experience both of them and decide for ourselves lol).  Bermuda’s  route was made for epic photo shoots. 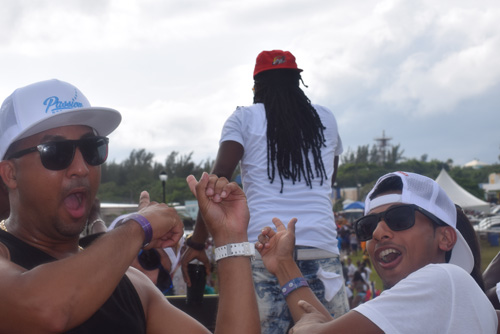 The march itself reminded me a bit of Jamaica with common bar trucks on de road shared by each band.  The difference being that there are “drink” trucks here for each band that have water, juice, and sports drinks for revelers to take as they need, but the BAR trucks are spread out a bit more and revelers can either give chits (some people pre-paid for a number of chits so they wouldn’t have to carry money) & others would pay $5 cash per alcoholic drink ...... another good reason to read previous blogs – Rhadi had mentioned bringing a camelback for the beverage of your choice – I chose to pack in water bottles filled with rum I’d purchased from the Duty Free shop at the airport in my track bag. Yes, I ran out because I shared with friends but hey, that’s what life is about & honestly it’s good not to be soggy drunk on de road so it all worked out with a bit of advanced planning. 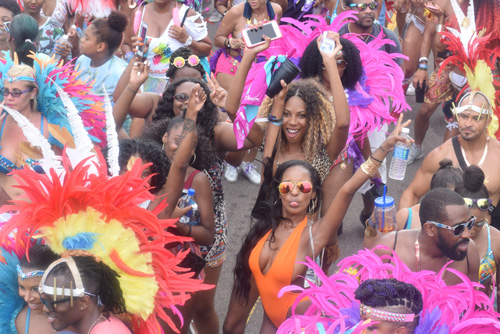 The head count of masqueraders exponentially grew from last year (a few hundred) to this year (several thousand) and yet has retained that “small island” feel.  Families, young & old lined up along the parade route and took it all in – there wasn’t really a need for ropes, people just observed from the side and occasionally were invited out for a lil wine.  It was hilarious to see firefighters standing on top of the firetruck on the side of the runway wining & pumping as we chipped by.  Everyone wanted to be a part of the fun.  Barrie Hype turned the airport fencing into a point of leverage & line-up for bumcees of all shapes and sizes to take a wine by asking masqueraders to head to the fence, which they happily obliged & had a time using.  Probably the most impressive move came from one of Beyonce’s Formation Tour Dancers who is clearly a professional dancer & an aerialist who took a traffic sign and used the pole to do an inverted split & wine ..... I mean that’s some athletic impressive wining lol. 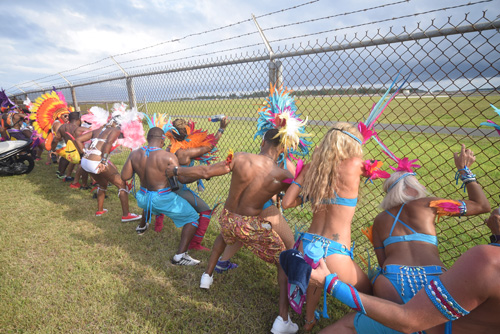 Special acknowledgment needs to go to fellow veteran feter, Najib aka DJ TanZ, whose section “Intense” found a way to supply what amounted to a full-scale all-inclusive experience for those masqueraders – with collection on shuttle service from wherever they stayed, to getting 10 chits each on the road to exchange for drinks (let’s be real that’s a good supply), to a post road BBQ at Tobacco Bay, to then delivering the masqueraders home ...... that’s an impressive option (not sure how feasible it is when a band grows exponentially in the future, but the “all-inclusive” concept & bonus BBQ definitely will be worth additional cost for those who want that experience. 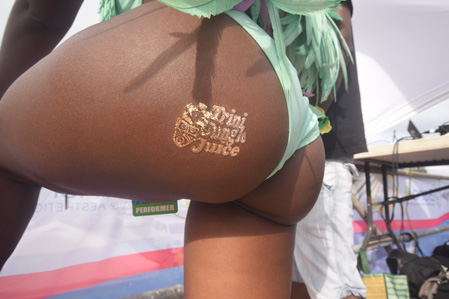 People attempt to compare one experience to another and stack them up in order, people love a good list of rankings & being able to debate them.  Heck, I’ve mentioned both JA & Cayman in this article alone.  Bermuda Heroes Weekend deserves some serious applause for its’ incredible growth in just a couple of years (far surpassing some other carnivals that have been attempting to get on the map & be considered as major players for the last decade).  Personally, I love the change of pace, uniqueness of the events in Bermuda and the picturesque views of the road march.  There’s no doubt the combination of these factors will continue to have the Carnival grow year after year and become a staple on revelers yearly calendar (much like Trinidad, Jamaica, Cropover, and Miami are some people’s consistent list).  Bermuda, great job & looking forward to the next chip down de road. 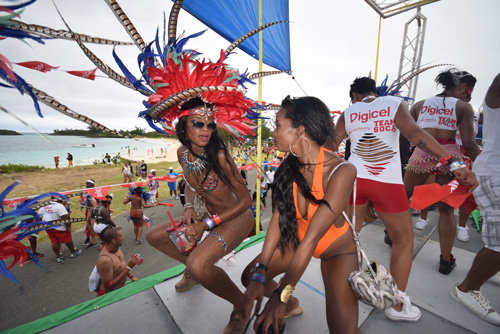 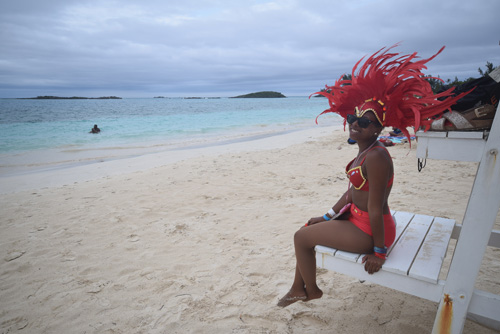 (can you think of a better place for a road march to end?)

'Til Next Time, Soca to de World!
-Jouvert Mike