Spice Mas has a little something for everyone.  Clearly, your wassi crew can get on bad at Jab Jab, your traditionalists can enjoy Pretty Mas, and those looking for a little mix of “new age lighting” and the aesthetics of watching the contrast of bright lights against the pitch black sky have the unique experience of Neon Mas.

After a full morning (8+ hours of Jab Jab) everyone has a chance to wash up (repeatedly), rest up and as night falls get ready to hit their second road march of the day – Monday Night Neon Mas.  If you want to compare the scenes of Monday morning vs. Monday evening they couldn’t be any more different.  This isn’t a matter of “night” vs. “day” – we’re talking the free-flowing, anything goes, satirical commentary on society, a complete mess of the road and anything that revelers touch or wine on VS. a mas band chipping & waving in unison, following uniform instructions, a judges table comparing bands, the use of lighting/technology pushing the innovative realm as much as possible, and the broadest age demographic of masqueraders you could ever imagine. 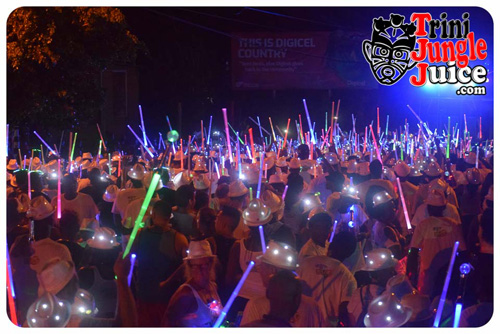 While it’s clear there are plenty of differences, there are also commonalities.  Grenadians are incredibly creative, resourceful, not to mention welcoming - sharing positive vibes consistently with anyone there to participate in Spice Mas, and incredibly proud of their local music which was thankfully on full display at every fete & mas.

Monday Night Mas is relatively new compared to the traditions of Jab Jab or Pretty Mas and you don’t see this on a regular basis at major carnivals, so it makes the experience that much more unique.  The aesthetic beauty of it is really something special to observe in the islands because I can’t think of another time where I’ve seen thousands upon thousands with light sabres waving left to right to the beat of Soca & following emphatic commands of Emcees on top of the Mas trucks. 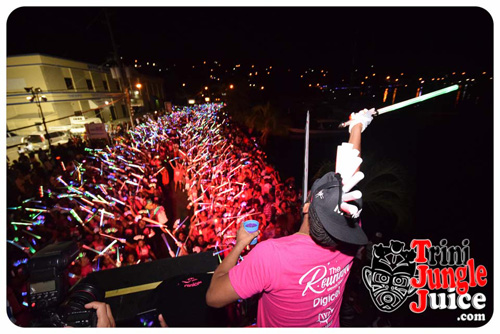 Monday Night Mas as compared to Jab Jab or Pretty Mas would be the “tamest” option for participants. Yes, there will always be a small crew that gets on bad bad, but for the most part people are patiently chipping down de road much like Soca Soldiers with their neon light sabres, gloves, or head gear being waved to & fro so people from teens to 70’s are playing in Neon Mas. 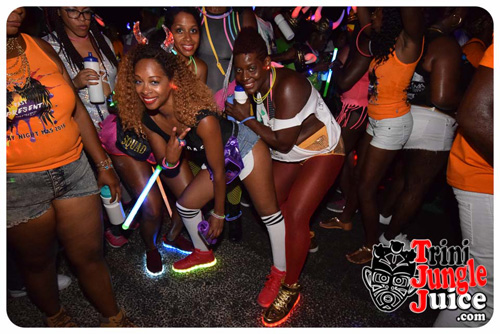 The creativity & resourcefulness I mentioned before had to do with people creating jackets with lights weaved into them & the extra battery to have them blinking was in the jacket packet, all types of shoes with neon lights glowing from the base, not just the store bought/manufactured mohawks of lights...... they made their own mohawks and hats covered in lights – really impressive ingenuity & hilariously funny. 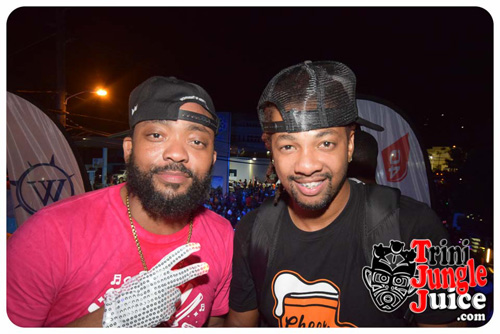 This was the first Monday Night Mas that Machel Montano had ever attended and he had a time participating with the light show & getting his section to shine in front of the judges table.  You can travel the world for Soca & hit carnival after to carnival, but there’s always something special about experiencing a unique aspect of a particular carnival – especially if they are the only ones to do it on a grand scale...... which Spice Mas definitely does with multiple pieces.

Tuesday morning my partner, Lester, and I decided we HAD to hit Jab Jab in the country.  Plenty of friends chose to skip it – either for sleep OR ladies weren’t trying to have to clean off after a 2nd Jab Jab & get their hair and make-up set for Pretty Mas afterwards.  Heading up into the hills..... and I do mean HILLS (like people hopping out the back of pick-up trucks so the trucks had enough power to make it up certain steep inclines & then hopping back in) was absolutely breathtaking.  The lush green mountains, driving through low hanging clouds, saying hello to people on the side of the road in villages of no more than 5 or 6 houses clustered together, looking out along the coastline as the ocean kisses the base of these mountains – there’s something very spiritual & grounding about soaking it all in and just “being” in those moments. 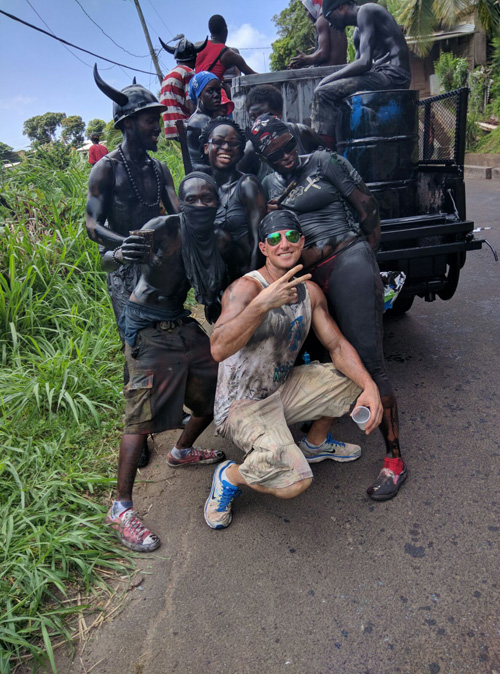 Jab Jab in the country truly reminded me of my years in Anguilla – true small island vibes. We rolled in to St. David and local police had the route blocked off to motor traffic & by the way, they don’t want you bringing glass bottles on the road – so if you plan to drink then put it in flasks or plastic bottles & then just buy chasers on the side of the road. 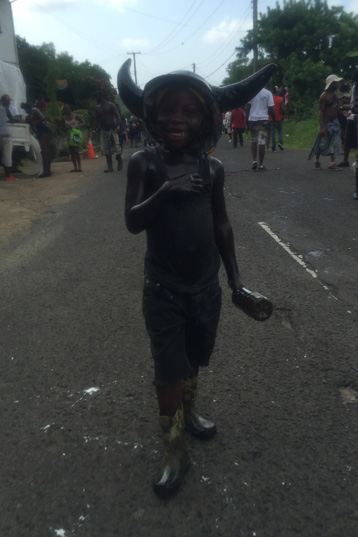 People of all ages, so many smallies coming in to be lil jabbers & elders of families still participating in their own ways on the side of the road – mind you this is basically a single road they go back and forth, up & down the hill.  Everyone truly embodies the spirit & pride of celebrating Jab Jab. Locals were more than happy to open their doors, welcome us in to have a drink, the more ominous the costume the more they appreciated having their pictures taken.  And the only music we heard was truly local music – it was a full embrace of all things Greenz.  To go up & down the road with 1 make-shift music truck, it’s organic & remains untouched by corporate interests.  The most beautiful thing to me about Jab Jab both Monday and Tuesday is that it truly is Grenadian culture on display & there’s no way in the foreseeable future that it can be lost to commercialism – Jab belongs to the people. 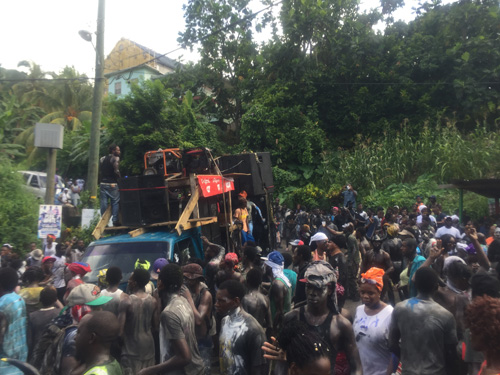 Pretty Mas starts at a more leisurely time in Grenada than so many other islands.  I don’t know what the official start time was but our crew got down there somewhere after 3 pm and it felt like it had just gotten started.  Having Jab Jab & Neon Mas leading up people seemed a bit more low-key or in need of an energy injection early on with pretty mas. 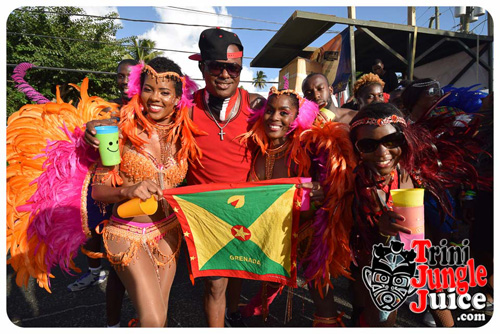 A number of mas bands are still on a chit system for masqueraders getting drinks so I look at that in the same light as a cash bar fete where it typically takes a bit longer for vibes to reach their peak.  The setting along the bay, looking out to the water while also having ample hills/walls for those who want to truly watch parade. 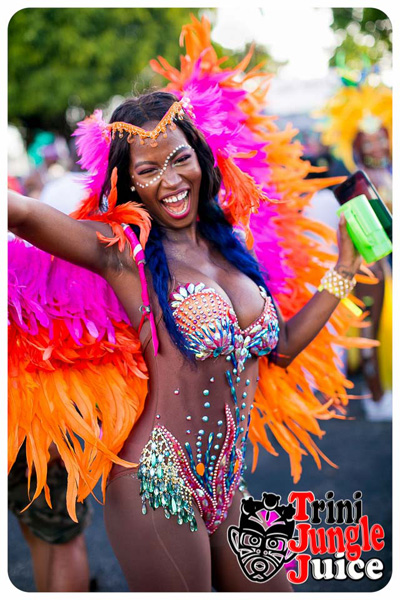 Chipping up & down the roads that line the bay as the day went on waistlines loosened & everybody started getting on bad – especially as the rain fell for about 15 minutes and everyone recognized it was time to truly let go.  As the sun went down the wotless behavior went up with bumpas moving in all directions.  Somewhere around 10 pm Pretty Mas ended and yet I had no desire to let go of the beautiful energy of Grenada. 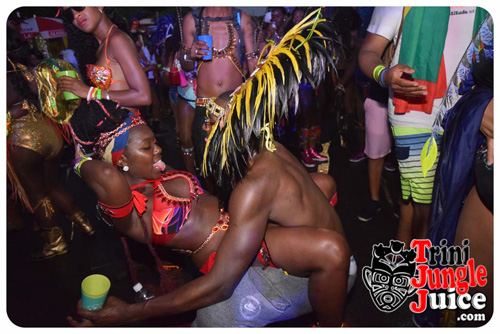 Rather than hop in a maxi or search for a friendly ride – I decided to walk 7+ kilometers back to my villa as the parade ended.  Most people would consider it crazy to walk home alone, in the dark, in a foreign country – yet there truly was something special about the vibes of Grenada.  Walking along the road, always with an eye out to the ocean & up to the picturesque moon as I could still hear the base pumpin from the mas trucks back in the bay. 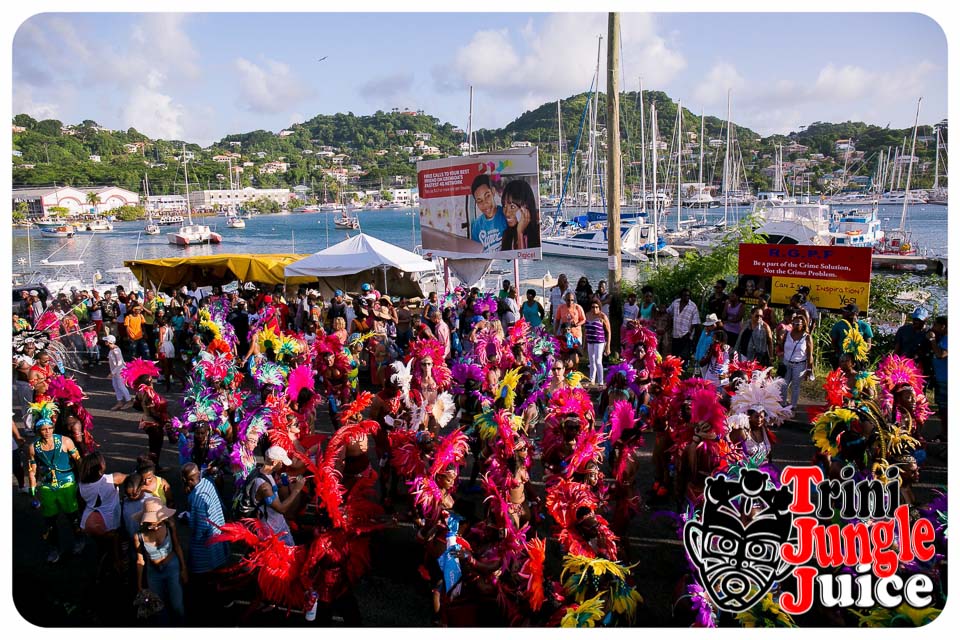 I started down in St. George’s Inner Harbour (Tanteen Rd, to Paddock Rd, Belmont Rd, Lagoon Rd, Ross Point, Falledge, to Grand Anse Main Rd and then the beach :) winding along the upper road then to the road along the coastline & then to where I truly wanted to soak in every last minute I could walking in the moonlight on Grand Anse Beach.  I walked home slowly staring up at the moon, listening to the bass pumping from the trucks off in the distance, waves gently kissing my feet as sand seeped between my toes – it was truly beautiful to have the opportunity to reflect on my time in Grenada, the people met, the culture shared, and the natural beauty of this slice of Heaven on Earth being the setting for a life-changing experience.

‘Til next time, Soca to de World
-Jouvert Mike

This article is part 5 of a 5 part series. Other articles in this series are shown below: