“Thank you very much for treasuring what is really ours.”
Kimberley Correia, Trinidad & Tobago student 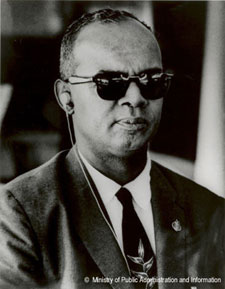 PORT OF SPAIN, TRINIDAD  – March 22, 2009 will usher in the eleventh anniversary of the inauguration of The Eric Williams Memorial Collection (EWMC) at The University of the West Indies in Trinidad and Tobago, by US Secretary of State, Colin L. Powell.  Dr. Williams, the country’s first Prime Minister who died in office on March 29, 1981, was heralded by Mr. Powell:  “No one was a greater fighter for justice and equality.  No one was a greater leader.”  More recently in 2007, Williams was honoured as scholar, politician and international statesman and conferred posthumously with South Africa’s highest national award.  Two months later, President Thabo Mbeki’s authorized biography was dedicated to Williams.

The Collection consists of Williams’ Research Library, Archives and Museum.  In 1999, it was named to UNESCO’s prestigious Memory of the World Register. At the time, the documentary heritage of only 47 other countries had been so designated.  Available for consultation by researchers, the Collection amply reflects its owner’s eclectic interests, comprising some 7,000 volumes, as well as correspondence, speeches, manuscripts, historical writings, research notes, conference documents and a miscellany of reports.  A Museum - containing a wealth of emotive memorabilia of the period; copies of the seven translations of Williams’ seminal work, Capitalism and Slavery (Russian, Chinese and Japanese among them) – Korean, Hindi and Urdu translations are in process; as well as photographs depicting various aspects of his life and contribution to the development of Trinidad and Tobago - completes this extraordinarily rich archive, as does a three-dimensional re-creation of Dr. Williams’ study.

Dr. Anthony Bryan, Professor Emeritus, University of Miami, states:  “It is perhaps the only historical collection of which Trinidad and Tobago can be proud.”  To date, four biographies of Williams either have been published or are in progress – one dedicated to the EWMC. In the prior seventeen years, nothing of note was written.

In addition to its physical repository of materials, the Eric Williams Memorial Collection has : initiated a biennial Essay Competition encompassing 155 schools in 17 Caribbean countries; instituted the first Caribbean Examinations Council CAPE Prize in History; organized an annual Lectureship at Florida International University (now in its eleventh consecutive year), in addition to collaborating with the Mayor of London in his 2007 Slave Trade Bicentenary Lecture Series, dedicated to Williams; partnered with the University of Sheffield (UK) in an annual one-day seminar for Caribbean Masters and Doctoral students; made inroads into Miami-Dade’s (US) student population of some 414,128 with the inclusion of  Eric Williams in the County’s State-mandated African American curriculum; sponsored four international conferences on Williams - as well as numerous conference panels - with many of their proceedings published; lectured to interested groups and students about Williams and the Collection; received multiple awards and recognition for its efforts; introduced an Oral History Project which includes well over 150 calypsoes either sung about Williams or mentioning his name – calypso in the Caribbean being the art of social commentary; facilitated Encyclopedia entries on Williams; and actively promoted the re-publication of Williams’ books – many of them translations long out of print. Several international book launches have been arranged by the EWMC, and the University of South Africa Press will soon publish two of his best known.  In addition, the Collection has been the subject of several academic papers, lectures and books, and has been actively involved in supplying and being prominently featured in collateral materials for a ‘walking tour’ - Black Oxford:  Untold Stories – encompassing vignettes of the Black scholars who have contributed to Oxford University’s academic reputation.  In the future, the Collection will team up with Williams’ alma mater at Oxford – establishing a scholarship in his name in perpetuity.

All of these efforts have been amply promoted in the local, regional and international media – from London’s British Broadcasting Corporation (BBC), and the British Virgin Islands Island Sun to the Organization of American States’ Americas magazine – in both English and Spanish.

Thus, with all of its other endeavours, the EWMC is a model for the Caribbean, a means of demonstrating to its younger generation the vital connection to the past – what that means for both the present and for the future.  When the University College of the Bahamas, the British Virgin Islands’ H. Lavity Stoutt Community College and the Central Bank of Trinidad and Tobago, along with the latter’s UK consultants, sought pointers in the creation of their own museums, it was to the Eric Williams Memorial Collection they came – visiting several times.

Guests of the EWMC Museum continue to be inspired by their experience, as were the Vice President of India; the Prime Minister and former Prime Minister of St. Vincent/Grenadines and Jamaica respectively; former Mayor of New York City Rudolph Giuliani and two Nobel Laureates in Economics, Amartya Sen and Harry Markowitz.  Thousands of Trinidad and Tobago students - along with schools from St. Lucia; Guadeloupe (including the Chamber of Commerce); the US Virgin Islands; Barbados; Chicago, Illinois, and the University of California, Fresno, US - have toured the facility since its inception.  While a mere 20 schools visited in 2001, this figure had jumped to 79 within two years.  And the young continue to demonstrate their profound comprehension as they speak, following, to what the Collection means to the population at large and, as important, what it will mean to future sons and daughters of Trinidad and Tobago, in particular, and of the Caribbean, indeed the world, in general.

• “A must come-after-school place!”
Kendall Comeran, Trinidad and Tobago Student

•  “It makes me proud to be a Trinidadian.”
Amanda Singh, Trinidad and Tobago Student

The EWMC is about teaching, research, and community service.
“What we research, is what we teach, is how we can give back.”