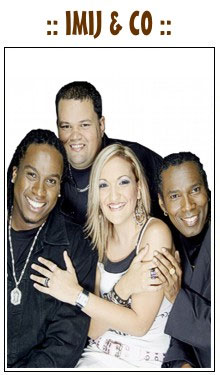 Digicel is proud to welcome Imij & Co. to Bacchanal...

The main attraction at Bacchanal 2009 this week will be the long awaited performance of Trinidadian soca band Imij and Co. Imij and Co. has been rocking the Caribbean and world stage for several years now and has also graced the shores of Jamaica on numerous occasion. The group is now a favourite among hard core soca fans and new converts as well.

Bacchanal 2009 has been a tremendous success with large crowds converging at the Mas Camp in New Kingston. Over the past few weeks Bacchanal 2009 in association with Digicel has brought quality entertainment to Kingston including the tremendous performance of Alison Hinds on March 6. Patrons at Bacchanal 2009 can expect a safe, clean environment with a different theme every Friday night. Bacchanal has definitely 'Gone Hollywood'.

Digicel is proud to welcome Imij & Co. to the Bacchanal Stage. Digicel has been a part of Bacchanal for six years and sees its relationship as a fulfilment of its desire to contribute significantly to the Jamaican cultural and entertainment scene.

Over the past five weeks Digicel has offered patrons a chance to sample the concept of the Moulin Rouge at Bacchanal. Digicel has created what can be described as a magnificent replica of the French Red Windmill Cabaret Building. The building is similar not only in architecture but also in decor, from the French interlaced silk drapes embroidered with gold trimmings to Parisian lamps at the entrance. To continue the theme Digicel has also brought to the Mas Camp; Mimes, Moulin Rouge Dancing Girls and Caricature Artists.

Imij and Co. is one of the top Soca bands to come out of Trinidad and Tobago and based on their past performances fans will not be disappointed.

Every so often a band comes along, adding variety to the already colourful musical genre landscape of Soca Music. Some merely melt into the existing mural, while a few supply it with fresh peaks. Imij & Co. fits snugly into the latter category. Since it’s inception in March 2001, the band has played the Gamut of top-drawer shows in the Caribbean, Canada, Europe and the USA.

Digicel is again the  headline sponsor for Bacchanal 2009. This will be the sixth consecutive year that Digicel is partnering with what has become one of the most popular celebrations of the year.

This year's theme for Digicel's activities is Moulin Rouge, which dovetails into the wider Bacchanal theme of Gone Hollywood, and in bigger, better style, patrons are guaranteed to feel the pulsating energy of Bacchanal 2009.

Since its introduction to the market, Digicel has identified with several music forms in Jamaica at various events ranging from Sumfest to Genesis to Rising Stars and Carnival.

With over nine weeks of exciting events, soca fans will experience the carnival flavour at weekly Friday night Mas Camp fetes where Digicel customers will have a chance to win a high-end phone and take advantage of special phone deals. Digicel will also be running a text promotion during the carnival season where two lucky patrons can win two Moulin Rouge costumes and the opportunity to jump with the Digicel band, and then get pampered at a spa right after that.