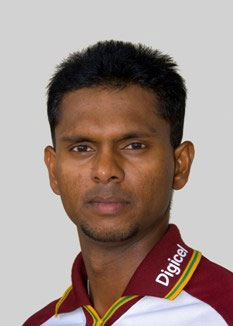 Thursday, March 19 – Providence Stadium, Georgetown, Guyana:  Experienced West Indies batsman Shivnarine Chanderpaul says the key to winning the five-match Digicel One-Day International Series, which begins here Friday, is for the Caribbean side to continue to display the fighting spirit that led to victories in the Digicel Test Series and Digicel Twenty20 International.

“I wouldn’t put ourselves ahead of anybody. I would just say we just have to play hard and keep fighting as hard as we can,” Chanderpaul said ahead of Friday’s first Digicel One-Day International at the National Stadium at Providence.

“It’s going to be a tough one. The whole Test series was tough. We still have to play well to win,” Chanderpaul added.

“England still have a pretty good team and still very good players in their team, a lot of match-winners, so we still have to be on our toes and keep playing hard,” the 34-year-old said. “They lost a few games and it’s playing at the back of the mind but I know they’ll come hard, and they’re going to come looking to win and looking for a good start.”

Chanderpaul warned against reading too much into the West Indian successes in the test series and Twenty20 International:  “I wouldn’t say everything has been our way. We managed to win one game in the test series in Jamaica. We won the Twenty20. That’s all we have won,” he said. “England had us on the run a couple of times and the series has been pretty level so far. We had to fight hard to survive and stay on top.”

The long-serving Guyanese, who made his international debut in his homeland 15 years ago, was recognised in the build-up to the match by the government. The left-hander was bestowed with the Cacique Crown of Honour, Guyana’s third highest honour

“Every award is special and this is one is quite special. It is always great to be recognised by your own people,” said Chanderpaul.

He said he was keen to give his countrymen something to celebrate in Friday’s match.

“It’s always a special time at home. I just have to go out and enjoy it."

The second Digicel One-Day International is also at Providence on Sunday.