LFS Music; Who are they? 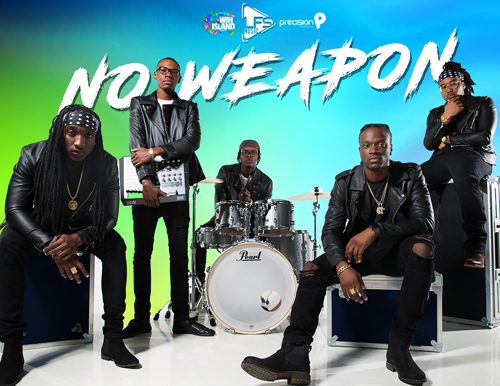 Let this phrase settle in your mind! These words are lyrics featured in the first single from LFS Music titled “No Weapon”; five newly added faces to the Caribbean music scene. Already, their sound is causing much chatter in the musical sphere. It makes sense that it would; their promising talents individually make their unit quite distinct.

Frontlined by award-winning songwriter turned performer, Nkosi “Kosi” Blackburne and his brother Jabari “Jabz” Blackburne, LFS also includes a professional drummer (Jamal “Kiddo” Joseph), Producer/Sound Engineer (Julius “Whixxkid” Le Gendre) and Disc Jockey (Curtis “DJ Toonkie” Julien). Their belief, in the paramount importance of positivity, motivated the use of an excerpt from one of the most popular biblical verses; “No weapon that is formed against thee shall prosper”.

No Weapon’ is filled with positive connotations that accompany the happiest music in the world; Soca. “All them try they go fail”, “Try again”, “Dash them with holy water” and “Once we have faith we straight” are four of the many phrases that speak to triumph and faith. The track was written by Nkosi and Jabari Blackburne and produced by Twin Island studios with additional production by Kasey Phillips of Precison Productions.

As they prepare to hit the ground running for Carnival 2018, they are guided by one specific equation; Loyalty + Focus = Success (LFS). No reasoning is required to indulge in positivity, but if one is mandatory; look at the world.