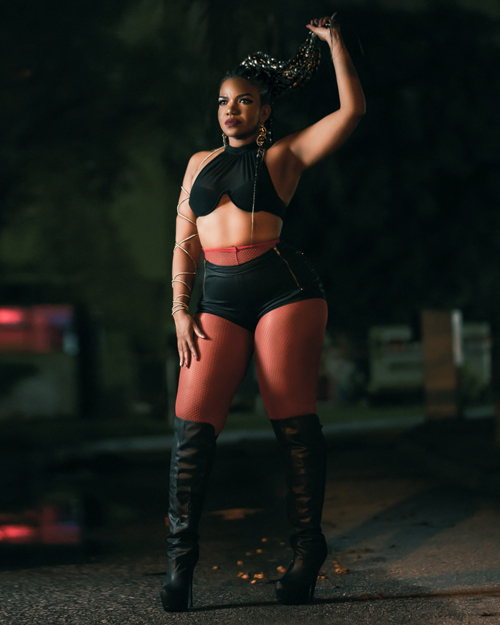 Port-of-Spain, Trinidad. November 15th, 2017 - New artistes all have the potential to be superstars, believe it or not. Sometimes all it takes is a little commitment and of course, consistency. T&T’s Keturah Gamba is one of those less known female songbirds who’s clearing her own path and making it understood that she refuses to take no for an answer.

Last year, the multi-faceted entertainer crossed over into the Soca genre for the very first time, and of course, one year later, she’s back again, ready, she says, for greatness. She teamed up with young production duo, Badjohn Republic and together they’ve laid down a full-fledged Soca single called, “Lose Control.”
The song was released on Monday, November 13th, and already with great feedback being received, Keturah is preparing herself in a major way, to ensure that she’s seen, heard and understood.

Like most other artistes, Gamba sings with passion, refusing to accept the comments of naysayers and instead turning every obstacle into a possibility. She’s worked with Pengco Music’s Randal Alexander in the past- the pair having dished out “Like Sinatra” in 2016. They’d however worked together on two singles prior, building a solid musical partnership that is often treasured by artistes in the business. Earlier this year, Keturah teamed up with Trinidad and Tobago’s Kerry John, an artiste who himself experienced tremendous carnival acclaim in 2017 when he penetrated the Soca circuit with “Drink King.” When he met up with Keturah however, they decided to unleash a raunchy, provocative dancehall/soca fused single they called, “Rude Gyal”. Gamba’s voice on that track was powerful to say the least, and delivered the essentials of a truly effective single.

Beyond music, Keturah Gamba has been championing an incredible Cancer awareness and assistance initiative called, “iCancervive”. Her sister having been diagnosed with the ailment, Gamba’s been working alongside some of her friends in the music industry to assist with the financial costs that often-time burden family members of those battling cancer. “This effort will remain a focus for me beyond my sister’s situation. iCancerive is more than just a family assistance drive. It is a ‘people’ assistance effort, aimed at helping everyone who is touched and scarred by this awful disease. Sometimes, it takes one person to be the driving force behind something that has the potential to help thousands. Maybe I can be that person,” said Gamba.

Music and a heart full of love, Ketutah Gamba’s leaving no stone unturned as she sets her mind on conquering the music business with her God given talent. “When He empowers you- gives you the tools you need to make it in this world, you should never ignore it,” she said, referencing the big man above.