Sejoux Takes Aim. He's Ready to Infiltrate with Music and So Much More… 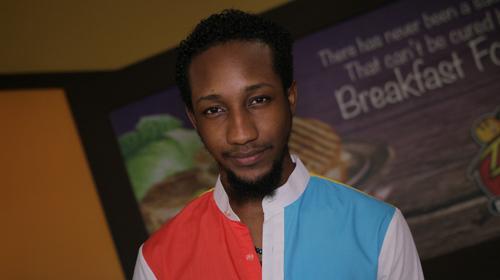 Port-of-Spain, Trinidad. February 8th, 2017 - Exactly one month ago, a new artiste emerged, excited and ready to show his true potential, not only as a musical force, but more than that, a creative in the holistic sense. Séjoux Lëo-Star is a force on the entertainment circuit. Not only is he an entertainer, but this young Trinidad and Tobago national is an international fashion designer, actor, model, athlete and artiste. Certainly an all rounder with an intense passion for all that he does, this emerging star is quite possibly, T&T’s next big name to transition outside of the Caribbean, in a major way.

Under the stewardship of New Age Media Production- a liberal platform for new artistes and creatives, Séjoux has already penetrated the Soca circuit, delivering a track called, “Revellin,’ last month. He wrote the single and with the guidance of 3Canal member, Wendell Manwarren, the track, which is considered a Power Soca/ J’ouvert anthem, was delivered much to the surprise of many who received it. “There’s a lot that many people are yet to find out about me. This aspect of my creative expression has always existed, really. It was just about revealing it at the right time,” he said. He believes the time is right. He thinks there is ample space for fresh talent, and having observed the market, Séjoux has taken flight, eager to fulfill his dream.

Last year, the young performer showed his versatility, acting in a short music film called, “Life of A Ghetto Youth.” It offered him the opportunity to work alongside a number of prominent Caribbean entertainers, among them, Sizzla Kalonji, Marlon Asher and Pressure Buss Pipe. Propelled to be the best all round entertainer he certainly can be, Séjoux’s ambitious nature will likely be the reason behind his eventual success.

With the folks at New Age Media Productions at his side, Séjoux’s career is taking flight. The company’s Founder and CEO, Khalaf Muhammad Peters says he is excited to deliver for not only Séjoux, but a few other artistes who are being represented. “We have a few acts on our roster. We are representing Nigel Jordan, who is also known as Mr. Nyo, David Cato and Oba Nicholas who’s best known by his sobriquet, Jay Jay Spade Life. “We’re eager to develop and nurture the creative expressions of these artistes. It’s really refreshing to observe the creative minds of these progressively driven people, and as an entity that shares in that very same aspiration, we look forward to delivering the music of these new age artistes to the world. We invite everyone in the Caribbean and by extension, the world, to sit back and watch us grow,” said Peters. Like the artistes themselves, Peters is ready to take off, bringing talent that he believes in, to the fore.

For further information and bookings, interested persons can email newagegng@gmail.com or 868-333-0011.