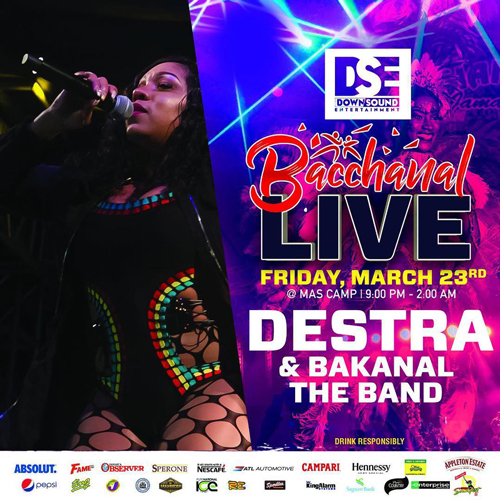 Destra, Queen of Soca, and Bakanal the Band will command the Mas camp stage on Friday 23 March when Downsound Bacchanal live wraps up the six-series party carnival event of 2018.

“Destra’s 2018 appearance is being sponsored by our new Bacchanal partner Downsound Entertainment (DSE), led by outstanding music entrepreneur and producer, Joe Bogdanovich”, said Michael Ammar Bacchanal Jamaica director. He expanded, “As you are aware, DSE acquired the Reggae Sumfest Brand in 2016 and has succeeded in rejuvenating the festival in the short time since. We mutually agreed, Joe and the Bacchanal team, that the synergies between the Bacchanal carnival programme and the Reggae Sumfest festival pointed to the great value that a partnership of both entities would engender. Bringing our beloved Destra for tomorrow’s performance is the first manifestation of what we expect to be a vibrant and productive collaboration.”

And, Joe Bogdanovich was no less enthusiastic about the association with Bacchanal Jamaica. “Downsound Entertainment is about creating top-class entertainment experiences by sharing the outstanding talent of our musicians across the region. Reggae Sumfest highlights Jamaican music in dancehall and reggae. But, I am very excited about the many creative and high-quality collaborations between the soca and reggae and dancehall musicians that are establishing a truly Caribbean sound, as well as a close camaraderie among the professionals in the field – musicians, lyricists, singers, producers. Even before the establishment of this partnership the Sumfest brand was represented at Bacchanal events through the presence of our Sumfest promotion team. The partnership will simply result in our upping the ante.”

Queen of Soca, Destra, comes to Mas Camp with a number of 2018 hits – “Family”, “Marry This Wine”, “Gimme” and “Somebody” as well as her collaboration with Erphaan Alves “Waistline Peltin”. And, of course, her standout 2015 hit “Lucy” is now a carnival anthem guaranteed to send the fans into a frenzy of wining. “Destra is a favourite of our fans and she has not missed Bacchanal Jamaica carnival over 10 years”, said Charmaine Franklin. “We are looking forward to her performance on Friday as we continue to raise the excitement in the lead up to the final events –  Beach J’ouvert, Bacchanal J’ouvert and the road march,” she added.