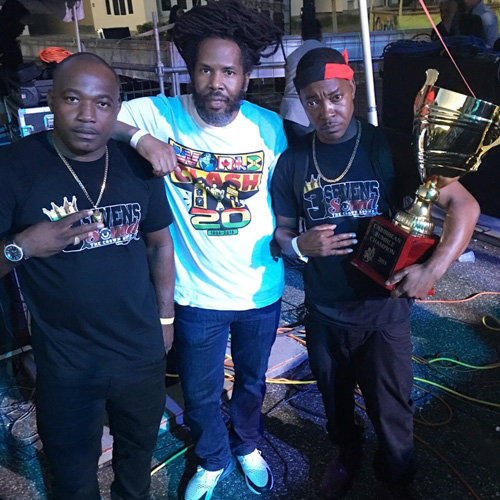 April 2018 - New York, New York - The first ever Caribbean Rumble went out with a bang just as dawn approached on the beautiful island of Antigua on Easter Sunday, April 1, 2018. The premiere sound clash event, produced by Irish and Chin and King of the Vybz 92.8 FM, converted Sir Vivian Richards Stadium into an intriguing musical war - which saw Antigua's own 3 Sevens Sound as the winner. Thousands of sound clash fans converged to cheer on the upcoming Caribbean sound systems, vying for a chance to become the Caribbean's official sound clash champ and slot on the World Clash stage.

"I believe that Caribbean Rumble is the ideal addition to the Rumble Series brand," says promoter Garfield "Chin" Bourne of Irish and Chin. "The Caribbean plays a vital role in sound clash, so showcasing some of their most talented sound systems was critical. I truly enjoyed the whole clash...but I have to admit...it was the mystery round that really sparked a buzz for me, as sounds had no choice but to be innovative and quick on their feet with tunes from whatever genre they picked (singers, God Bless, ganja man, etc)."

Caribbean Rumble is the newest clash in Irish and Chin's Rumble Series. Designed to convene and identify rising selectors and sound system stars in the arena, the Rumble Series has evolved into an effective platform of producing international sound champions. Established in 2016 by Irish and Chin, the Rumble Series consists of 6 clashes in 6 countries, which serve as the preliminary/feeder clashes for the renowned World Clash, which is celebrating it's 20th Anniversary through out 2018.

The winning 3 Sevens Sound was launched in 1992 in the village of English Harbour, Antigua. Played by MC Panther (Handel Bailey) and Selector Federal (Okharie Barnes) at Caribbean Rumble, 3 Sevens proved why they are one of Antigua's most feared sounds upon defeating Code Red in the final rapid fire aka "tune fi tune" round. “This is the biggest victory of our career! Winning the first Caribbean Rumble is a huge accomplishment for our sound, so we are naturally excited,” says 3 Sevens Sound member Jeron "Booby" Samuel.

Irish and Chin is at the forefront of international sound clash promotions. They have dedicated a 20+ year career to the preservation of sound clash, the rich music art form and culture, which originated in Jamaica. While World Clash has done a phenomenal job of showcasing the talent of sound systems from around the globe while raising the bar for sound clash entertainment, the conception of the Rumble Series was vital to keep the sport young, fresh and active.