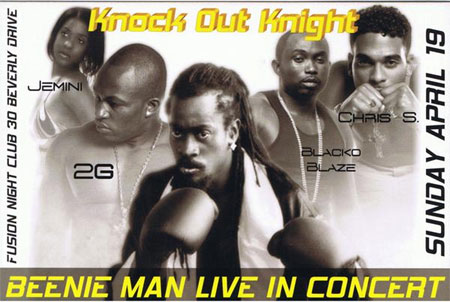 Presented by Knock Out Knight Entertainment, Beenie, with his unprecedented number of Dancehall hits and anthems, will appear in front of loyal Toronto fans who have not seen their King since 2007.

The evening’s most anticipated female appearance comes from that of Jemini who is no stranger to the stage or limelight.  Performing for the past 2 years, Jemini, known for her soul sound has expanded her catalogue to include Dancehall.

While Beenie is in Toronto, he will be filming a music video for his latest single, which will also feature Jemini.

Beenie Man (aka Moses Davis) was born in the tough Waterhouse district of Kingston, Jamaica, on August 22, 1973.  By the time he was ready for school, the toddler had already decided on a career as a DJ.  He has gone on to record 19 albums, has several #1 hit songs such as “Romie”, “Girls Dem Sugar” and most recently, his Stephen McGregor produced hit “Gimme Gimme” which is featured on the 2009 Ragga Ragga Ragga Compilation CD by VP Records.

Jemini is the true essence of humility, beauty, inspiration and passion!  This Canadian songstress of Jamaican ancestry is poised to trandscend the pop music scene with her soulful brand of lovers rock and roots reggae music. Her most recent and initial debut "No Turning Back" has been well received and is in current rotation on reggae playlists worldwide.  The video for "No Turning Back" was recently shot in NYC by director Berman Fenelus and ALLAREAACREW.com, which is slated for release this coming fall.