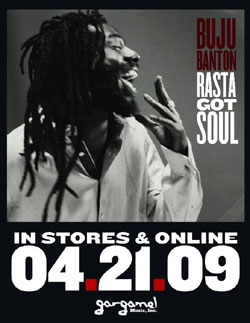 His most musically audacious work to date, Rasta Got Soul unites Buju Banton's characteristic vocals and consistently positive messages, grounded in the tenets of Rastafari, with organic reggae rhythms carefully crafted by a select aggregation of the island's finest musicians. "Roots is the foundation," explains Buju, who became a dancehall superstar in the '90s by riding the latest synthesized beats. "The computer stuff gets monotonous; every third production you can hear some similarity, as opposed to when you listen to something live there is always something different," he says.

The "magic moments, magical heights" Buju alludes to on the album's early single "Magic City" are amply scattered throughout Rasta Got Soul's 15 tracks. The new single "A Little Bit Of Sorry" is a lively ska ditty complete with fast- paced keys and spine-tingling harmonies. Joyous horns celebrate the message of self-determination on "I Rise." Thick, steady grooves underscore the power of positive thought on "Optimistic Soul." The song "Bedtime Story" featuring Wyclef Jean presents a poignant commentary on the war in Iraq and its impact on the lives of young children.

The way Buju describes it: "Rasta Got Soul features nothing but soul shifting, uplifting reggae, to inspire, to thrill, to light an inner fire, to be glorified and rejuvenated; I just want to recreate that vibe when reggae music would speak to everyone."