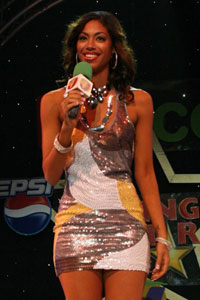 ...all systems are go for the most popular show in the history of Jamaican television to start rolling cameras in search of Jamaica’s next Rising Star.

Wednesday April 8; Kingston, Jamaica: Digicel Rising Stars returns for its sixth season on April 18 with its first audition in Portmore. The talent competition which had its launch live on TVJ’S Smile Jamaica this morning is poised to be better than last year.

Popular host Yendi Phillips is back on board for this years’ competition and all systems are go for the most popular show in the history of Jamaican television to start rolling cameras in search of Jamaica’s next Rising Star.

The show’s producer, Sharon Schroeter can’t wait to get the ball rolling: “Our first auditions are April 18 in Portmore, and we move from there to Ocho Rios then onto Montego Bay, from there to May Pen, and then ending in Kingston.”

If something seems new with the list of audition sites it’s because this year will be the first auditions will be held in May Pen.

Schroeter continued: “Traditionally, auditions in each town take place over two days, but this year we’ll have the auditions in one day,” she commented. Schroeter also revealed that this year, Digicel Rising Stars will be adding more stories about the contestants.

Expounding she said: “We played with that a little last year, and we got really positive feedback. So this year, we’re including a lot more stories about the contestants. Where they come from, their lives, behind the scenes, just stuff that will make Jamaicans feel a greater connection with the potential Rising Stars.”

Schroeter also disclosed some of the production changes planned for this year: “Our biggest change comes in terms of production; from when we start airing the shows to when the finale is, and things of that nature. The team will be putting in more hours, to generate a better quality show.”

Digicel’s Brand marketing Manager, Marlon Davis commented that Digicel is more than pleased to be able to continue as the shows’ title sponsor.

“This is one of those projects that we are especially pleased about as the show gets bigger and better every year. As almost every Jamaican watches Digicel Rising Stars, the show brings Jamaica's biggest family together, the Digicel Family.” Davis said, adding that he’s particularly excited about the live launch, and the changes in production.

These sentiments were echoed by the show’s executive producer, Tahnida Nunes:  “This season is going to be our most exciting season yet,” a smiling Nunes said. “While it’s going to be a little more work from our end in terms of the hours we’ll have to put in for production of the show, Digicel Rising Stars 2009 is shaping up to be a fantastic ride. Last year, we had our first female winner and that was amazing, so who knows what else can happen this year.”

Nunes is confident that persons won’t have to worry about the popular features of the show like the Chill Room.

“We’re glad to say that KiKi will back on the show as the Chill Room host, and our judges are back on board to steer our contestants to stardom.”

After the auditions only 16 lucky finalists will see their berth into the studio finals, and benefit from experienced hands like Michael Harris and Michael Holgate, the shows’ voice specialist and performance director.

One thing is certain... of those 16, only one will become the 2009 Digicel Rising Star.