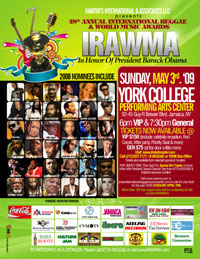 NY, APRIL 2009:  It was the press conference to announce the participants in the coveted black-tie, made-for-television, red carpet 28th Annual International Reggae and World Music Awards (IRAWMA), with an expected attendance of 50 media members. However, hundreds of media members, sponsors, nominees and other entertainers jammed the exclusive BLVD nightspot in New York City, on Tuesday, March 31st to witness and learn of the nominees, special awardees and participants for the grand celebration of reggae and world music royalty.

Hosted by Actress Hazel Goodman, the event was attended by members of the press and nominees such as Brigadier Jerry, one of the special awardees who helped to announce other nominees: Ryddim Kings/Inner Roots founder Owen Dalhouse, Hollywood Actor Leon, female dancehall sensation Barbee, and Lady Ann, who is receiving her first nomination since 1984.

American Airlines returns as the official carrier, while the JFK-Hampton Inn Hotel and JFK-RAMADA Plaza Hotel will serve as the official hotels. However, you must mention “Reggae Awards” to get the special rate.

Below are the sponsors’ locations where tickets can be purchased!