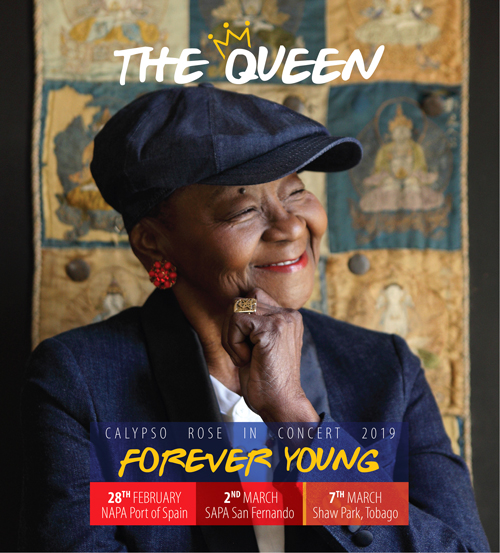 As 2018 comes to a close and as our musical icons depart for the musical heavens – Ken Professor Philmore, The Mighty Shadow, The Original De Fosto Himself, and now Lord Superior, we mourn their passing and celebrate their immense contribution to the cultural landscape of Trinidad & Tobago.
Calypso Rose, who continues to fly the Trinidad & Tobago flag so high, is much saddened by the passing of her contemporaries and she has many stories to share about these greats. It seems that our Calypso Queen – MaCArtha Sandy Lewis, Calypso Rose has no intention of slowing down.

2017 was a landmark year for her Majesty, when after winning a Victoire de la Musique in France for her album “Far From Home” and selling over 100,000 albums, Calypso Rose crowned herself the Queen of France.  And yes, she is adulated in France, where her music is listened to by hundreds of thousands of Europeans and her concerts are sold out to huge crowds outside the Caribbean Diaspora.  She is a phenomenon and her life story, from a village in Tobago to the hearts of the French people after a career in music spanning over 50 years, is surely one for the history books.

2018 solidified Calypso Rose’s celebrity status in France and other European countries, where she released a second album “SoCalypso and continued touring to sold out crowds in some of the best concert halls in Europe. The highlight of the year for her was her intimate performance on the exclusive Caribbean island, Mustique, where Prince Charles and Princess Kate were in attendance; the whole story was featured in UK Hello Magazine.  She was also recognized in her beloved Trinidad and Tobago and given the Order of the Republic of Trinidad and Tobago, the country’s highest honour.  The accolades and awards continue, as Calypso Rose, just won the prestigious SACEM (French copyright society), writer’s award in the World Music Category.

For 2019 Calypso Rose is fully booked for international shows all over the world.  She is recording another album with a lot of surprises, some will be revealed soon, as Carnival 2019 is around the corner.  In 2019, MaCArtha Sandy Lewis will be 79 years old, but she is FOREVER YOUNG.

On the day, the Mayor of Port of Spain, called Calypso Rose Carnival Thursday, NAPA will come alive with the energy and charisma of Calypso Rose backed by Sokah The Band (Nailah Blackman’s band of professional young musicians…. Watch out for them!).
Rose will be joined on stage by a cast of some of her favorite “children”.

Calypso Rose management team, Jean Michel Gibert and Lorraine O’Connor, are teaming up with Randy Glasgow Productions Ltd. to present a fantastic event of high quality at the best concert venues in the country.  We thank especially the Ministry of Community Development the Arts and Culture and the Tobago House of Assembly for consistently supporting one of Trinidad and Tobago’s best ambassadors.

Stay tuned for a lot more information soon to be released.