Heavily Anticipated Video For "Click My Finger" Set To Release 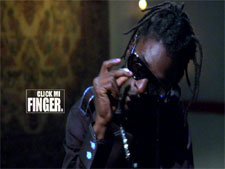 (Kingston, Jamaica - April 9, 2009) Truckback Records is pleased to announce the heavily anticipated release of the music video for the breakthrough song "Click My Finger" by Erup. The video will debut in late-April 2009 and Hype TV will air an exclusive behind the scenes look at the making of "Click My Finger".

Filmed around Kingston, Jamaica by sought after director Ras Tingle and his award-winning camera crew, Erup shines throughout as the object of many a beautiful woman's desire. When the big party kicks off at Club Weekenz, Erup is clad in sleek custom Italian apparel including shirt made with genuine Swarovski crystals spelling out "ERUP" on the back. Always the man of the moment, Erup clicks his fingers and a full entourage of sexy beauties gravitate around him.  Star dancehall dancer Chi Ching Ching and model Latoya Grant deliver outstanding supporting roles in a creative storyline directed by Ras Tingle, produced by Danielle Desulme of TD Films and edited by one of the reggae industry's best editors, Mykal Cushnie. The video follows the dance promoter (Chi Ching Ching) as he tries convincingly - and hilariously at times - to woo the girl (Latoya Grant).

Dancehall's most recent breakthrough artist, Konshens, also performs along side Erup in a special cameo appearance while the party scenes feature stalwarts in the dance such as Rebel T Sound and Aly Patch as well as dance crews Judgement Yard and Dutty Link, rising stars Deh Deh, Shifta and the Fras Crew along side uber-promoter Dozer of Miami Link Up. Sanchez, of Erup's Fully Govern crew, also represented. The support of Magnum Tonic Wine and Peter Norton's innovative advertising firm, DigiAds.com,helped create a realistic mood on the set.

Reaching #68 on the Billboard Hot 100 R&B/Hip Song Chart at the end of 2008 is one of a series of milestones that saw "Click My Finger" touch #9 among overall spins on New York City's influential HOT97 FM, #1 on dancehall reggae charts in New York, London, Jamaica and South Florida and featured on Canada's #1 new Fall television show watched by an average of 1.36 Million viewers, So You Think You Can Dance Canada.

Operating out of a retired but still working converted box truck in Kingston, Jamaica, Truckback Records is the creation of Steve Locke, Heather Cameron, and Adrian Locke with promotional support provided by Johnny Wonder and Lisa Marie Edwards. "Click My Finger" is the lead track on Truckback's Gearbox Riddim, which spawned nominations for Riddim of the Year, Song of the Year ("Click My Finger"), Comeback Artist of the Year (Harry Toddler "Don't Run In")