Canadians Flock to 'Beachorama' for Fun in the Sun! 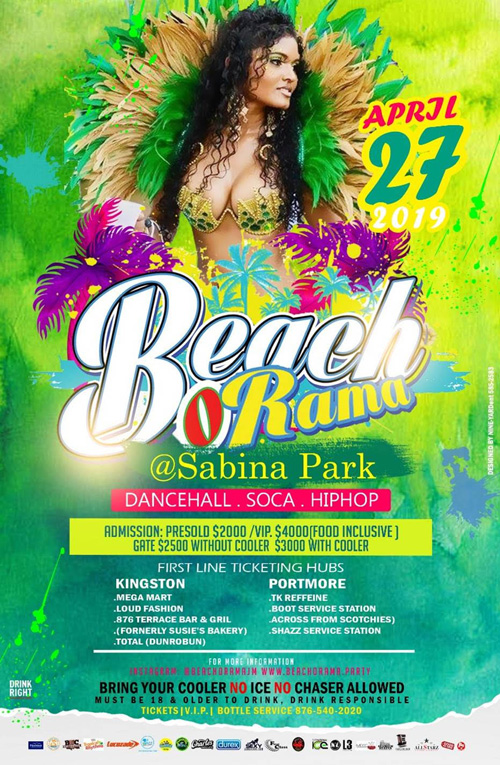 It is no secret that Canadians have endured an exceptionally harsh winter with temperatures averaging -20 degrees, and it is also no secret that Canadians love to party.  Wren4Life of All Starz Entertainment and Niyah of MYC Entertainment have teamed to take Canadians from the cold with Beachorama on Saturday April 27th, 2019 at Sabina Park!
Created by Wren4Life, Beachorama is a beach-based event held 4 times per year which allows party-goers to indulge in the best music, from the best DJs on the beaches of Jamaica as they enjoy premium beverages.  When contacted by Niyah of MYC Entertainment about hosting hundreds of travelers for fun in the sun and sand, Wren didn’t hesitate to say ‘yes.’  “I’m glad that Beachorama has grown from being a party in Jamaica to now being a party that hosts foreigners too.  Canada is more than welcome to party with us!”

Adding to the excitement of the Canadian presence, rapper Rooftop Rep from New York whose catalog of music includes a collaboration with Lil Pump and Kanye West will be joining the artistic line up.  When speaking to media about making this union happen, Niyah said “I am excited for this partnership. As a Canadian promoter, my job is to give fans new experiences they’ll love, and Beachorama does that.  Thanks to support from Barcode Saturday’s, Canada’s hottest party, we have a chance to take clientele from Canada to Jamaica.”

Fans are welcome to bring their own coolers to the event as DJs play the best in Dancehall, Soca and Hip Hop.  Joining Rooftop Rep on the stage is King of the Dancehall Beenie Man!  The DJ lineup includes Kurt Riley, Team Shella, Hattaklaps, Copper Shot (Sean Paul’s tour DJ) and Rolexx (Konshens DJ).

Beachorama is a quarterly event that blends premium entertainment with premium fans.  Now in its 7th year.  For more information visit www.beachorama.party

About Niyah of MYC Entertainment:

Founded in 2001 by Niyah, MYC Entertainment has become synonymous with connecting party and event goers with the hottest DJs and prestigious venues.  Her 18 years of experience has seen her work showcased in Toronto’s famed entertainment district, particularly with Club Orchid and the Barcode Saturday’s brand.  Her every Saturday event sees capacity crowds while stars such as Firekid Steenie, and MC Crazy Chris make patrons party like it’s 1999!