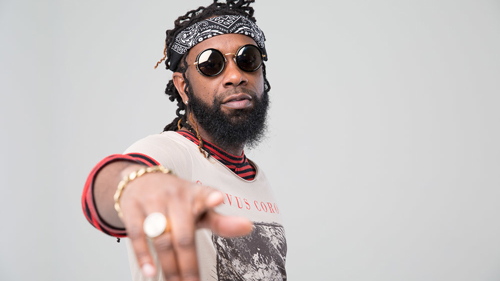 When you are able to fuse words together and add a melody in all but 2 minutes, you must be international recording artist Lyrikal. Trinidadian born Devon Martin started singing in the church choir at the age 7, once he realized he could actually sing he began participating in school talent shows and neighborhood block parties. As a youngster his biggest inspirations were calypsonian Crazy, Shabba Ranks, Buju Banton, Bob Marley and Super Cat their styles of music helped him to develop his own style.

He migrated to the United States at the age of 13, where he got heavily involved in soccer and track and field, but music prevailed and by age 16 he was back at it, performing at block parties and talent shows, it was fun and he loved it, he even opened for the Wutang Clan at Club Wave and Sean Paul at St George, Staten Island.
Lyrikal although very talented only took his music career seriously in the year 2003, where he started to record professionally. His first recording was at Dainjamentalz studio in New York, where he recorded a track entitled tiger bone. Since then he has managed to be a consistent voice on the airwaves worldwide and is now one of the most sought after performing artiste. His music has taken him on tours to London, Ghana, Guadeloupe, Berlin, Toronto, Bermuda, Amsterdam, North America and the Caribbean.

Lyrikal has built an extensive catalog, and has released several hits. He has received 5 COTT (Copyright Organization of Trinidad and Tobago) music nominations in 2015, and won the award for People's Choice Most Popular Single. His repertoire consist of over 60 releases including Jammin Sake, Picture Perfect, Freedom, Dip & Roll, Cloud 9, Loner, Conquer Meh, Locked Down, Part Of Yuh Nature, All Over De Gyal, Ramajay, 25/8, Lit, Criiminal Wine, Yuh Blessed, Rude Wayz and countless collaborations with leading artistes, including Konshens, Patrice Roberts, Shatta Wale and Ghanian Songstress MzVee. He released his first album, titled "The Journey" in 2016 and his second Album "All or Nothing"  in July 2018.