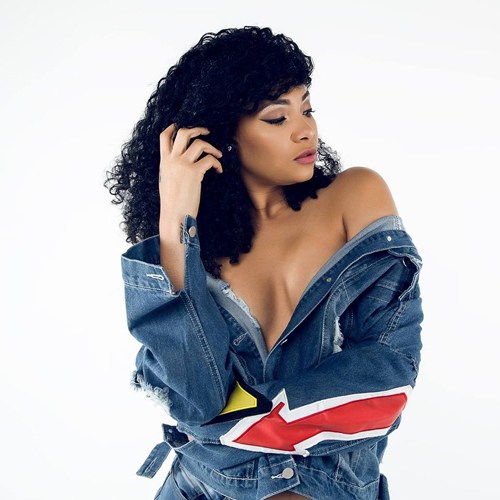 Who would have thought that a simple jingle for a local company would be the start of a music career that seems destined for success? Well that is exactly how young Guyanese singer Timeka Marshall got her break. In 2006 a local telecommunications company staged a competition for their new jingle. Timeka entered and won. This became the springboard for recording her first R&B Single “We Should Separate”, which was released and quickly followed by a music video.
Produced by Muzikmedia and shot on location in Jamaica both the track and the video gained popularity on the Caribbean music scene and held their own in heavy rotation on radio and television stations across the region. Yet there was much more to unearth in the way of Timeka’s talents.

After performing “We Should Celebrate” on the Guyanese entertainment circuit to appreciative audiences, Timeka was keen to cultivate her songwriting talents and attended the Barbados Music seminar and Showcase in February 2007. There she blew regional and international music executives away with her obvious talent and enticing sensuality. With just one performance of the gritty dancehall track “Nothing At All”, Timeka was immediately signed to a developmental deal which would see her working with some of Jamaica’s top producers.

Timeka’s commitment and hard work in the initial months she spent in Jamaica has paid off, with the release of two singles – “Free” and “Ice-cream Boy” (a fresh taste on a classic) produced by international reggae producer Clive Hunt and his team of talented musicians. Her relationship with Jamaica and the treasure trove of musicians, directors and producers there continues to grow.

As soon as the two singles were in heavy rotation on Guyana’s airwaves, Timeka returned to Jamaica to continue recording. This dedication is a clear indication of her intention to take her music throughout the region and beyond and add to the growing list of Caribbean artistes who now rank among the international superstars of the entertainment industry.

In February, 2008 she was one of the opening acts on Bob Marley’s Tribute concert “ Smile Jamaica” in Montego Bay and a string of appearances followed as she continued to hone her performance skills and introduce herself to the Jamaican public.

As Timeka continues to evolve as an artist, she looks set to end 2008 on as much a high note as how she started it. She recently shot the music video for her saucy and seductive single All Night, with the accomplished Jamaican director Jay Will. The video’s director, known for his creative imagination and a solid body of work behind him, decided on a sizzling concept for the video, to match the steamy theme of the track.

This latest single is produced by one of Jamaica’s most prodigious producers, Stephen McGregor, who is known only to work with the most talented within dancehall and reggae music. Yet another feather in Timeka’s cap, she has proven that her music has been accepted regionally, with approval coming from the nation with arguably the harshest critics. But this intelligent young woman is already acutely aware of how fickle the industry can be, and as such has already landed lucrative endorsement deals.

She has been chosen as a spokesperson for the DDL Fritolay brand and in this role she has visited several schools in Guyana impressing on the students the importance of education and HIV/AIDS awareness. Even in Jamaica, she has embraced the opportunity to empower her peers as evidenced by her acceptance of an invitation from the KLAS radio station to be included on a tour of specific High schools across the country.

The KLAS Teen Jam High School Tour seeks to spread positive messages to young teens as it rolls across the island, with the music which is played along with the artistes who accompany it. The artistes typically perform, share stories with teens, give advice as they sign posters and CD’s.

When she’s not in the studio, Timeka can be found gracing the catwalk of numerous fashions shows and is one of the most sought after models in the Guyanese fashion industry. Such is the diversity of her talent. It has been barely two years since winning the jingle competition, yet Timeka has accomplished more in that short time than she could have imagined. She is currently nominated in five categories at this year’s Guyana Music Awards to be held on November 30. She goes up against acts such as Adrian Dutchin, Jumo, Shelly G, Natural Black, and First Born.

Following on the heels of veteran musician and producer Eddie Grant, Natural Black and First Born’s reggae success, Timeka has begun to reposition Guyana as a viable force on the international music scene. And her work is far from over.