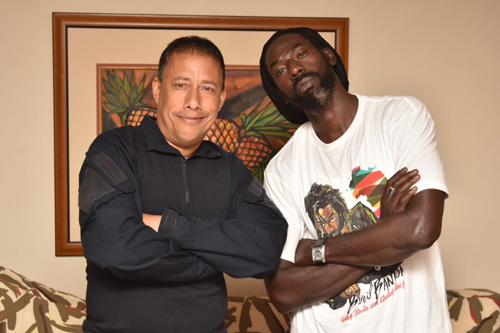 Photo: Cop and Buju
Port-of-Spain, Trinidad. April 20th, 2019 - An apology has been extended by Commissioner of Police, Gary Griffith to Jamaican reggae artiste, Mark Myrie, Buju Banton. The Commissioner of Police was photographed at the hotel room of the entertainer, which was searched by members of the Trinidad and Tobago Police Service on Saturday afternoon. 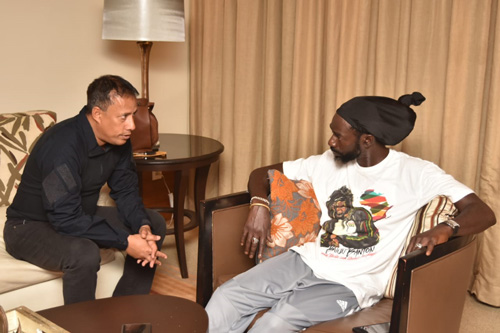 The officers told Mr. Myrie that they were in possession of a search warrant. In the aftermath, it was made abundantly clear that nothing had been found in the artiste’s possession. Commissioner Griffith gave the assurance that the matter would be personally investigated, noting that he was told that intelligence had been obtained. 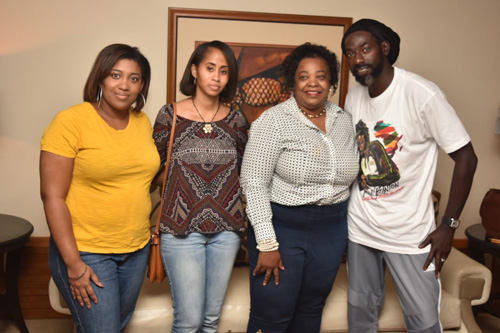 Photo: Jamaica heigh Commission and Buju
Officials from the Jamaican High Commission, Counsellor Delita McCallum and First Secretary Lasheree Senior made their presence felt, delivering words of encouragement and support to Buju, in the aftermath of the afternoon’s untimely incident.

Buju told the Commissioner that despite everything, he has nothing but love in his heart for the people of Trinidad and Tobago. He is prepared to perform at the Queen’s Park Savannah at the I Am Legend Festival being hosted by High Frequency Entertainment, tomorrow.