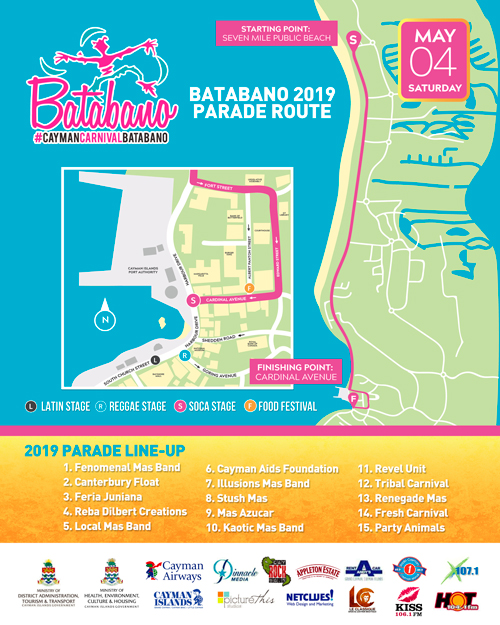 The Cayman Carnival Batabano Committee is thrilled to announce that there will be FIFTEEN (15) masquerade bands, groups, and floats in the Batabano parade this Saturday, May 4, 2019, with up to 4,000 masqueraders anticipated this year.
The Batabano Committee said four new mas bands joined the national carnival this year, including a new Latin group called Mas Azucar, Kaotic Mas Band, Local Carnival, and Fenomenal Mas Band. Also new to the parade this year is a cultural dance group called Feria Juniana from Honduras doing traditional Honduran dances wearing traditional Honduran dresses. There is also a new corporate float by Canterbury this year, and a new group of local and international beauty queens called Stush Mas. Cayman Aids Foundation will have a king costume in the parade again this year, and there will also be costumes by Cayman’s longest-serving costume designer, Reba Dilbert. The 2018 Batabano Band of the Year, Tribal Carnival, said they have doubled in size this year, with more than 400 masqueraders expected in their band for Batabano 2019. 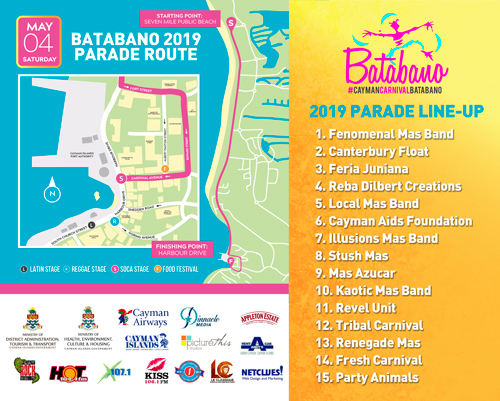 "We couldn't be more elated with the tremendous support that Batabano continues to receive from local Mas Bands and masqueraders, as well as from local and international groups who are eager to be part of this 36-year carnival tradition in the Cayman Islands," said Batabano Chairperson Donna Myrie-Stephen. "This year's parade will be one of the biggest in the history of carnival in Cayman, and we invite all residents and visitors on the island to come out and experience it."
The Batabano Committee also this week released the line-up of the masquerade bands in order of their appearance in the parade. Leading the parade of mas bands will be Fenomenal Mas Band followed by Canterbury Float, Feria Juniana, Reba Dilbert Creations, Local Mas Band, Cayman Aids Foundation, Illusions Mas Band, Stush Mas, Mas Azucar, Kaotic Mas Band, Revel Unit, Tribal Carnival, Renegade Mas, Fresh Carnival, and Party Animals.

Per tradition, the Batabano parade starts at the Seven Mile Public Beach at 1pm and ends on Harbour Drive in the heart of George Town. The parade will take its usual route down Fort Street and pass the final judging station in front of the Legislative Assembly and head towards the main Post Office. However, this year the parade will turn down Cardinal Avenue in order to position masqueraders right on Harbour Drive where the free "Last Lap" street dance will take place immediately following the parade. The much-anticipated Batabano Food Festival will therefore be on Albert Panton Street this year instead of Cardinal Avenue. 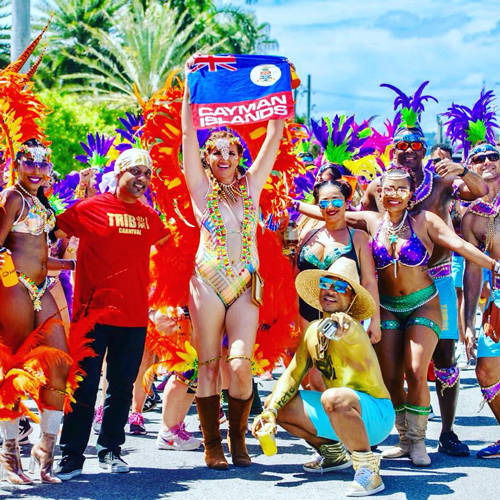 Following the parade, the public is invited to come out and enjoy the free Last Lap street dance from 6pm until Midnight, which will feature 12 local, regional, and international DJ's on three stages with three genres of music - the Soca Stage playing the latest and greatest Soca favourites, the Reggae Stage, and the Latin Stage playing a variety of Latin music throughout the evening. There will also be a bar in each area to better serve event patrons. 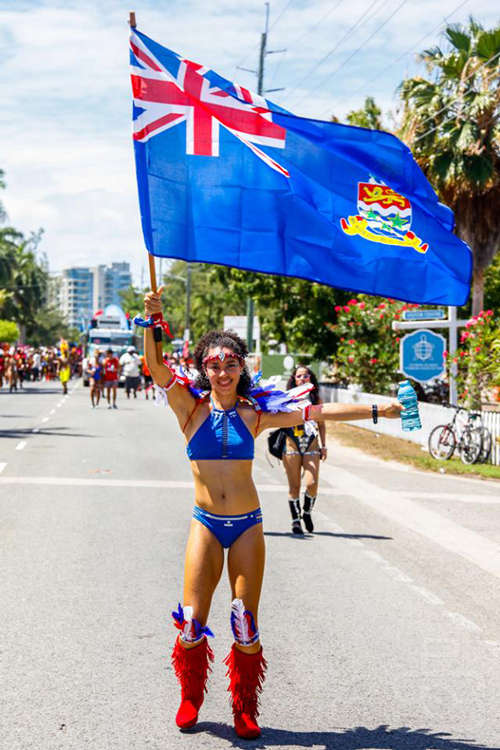 ABOUT CAYMAN CARNIVAL BATABANO
Established in 1983 by the Rotary Club of Grand Cayman, Cayman Carnival Batabano is the National Carnival of the Cayman Islands. A salute to Cayman’s turtling heritage, “Batabano” is the native name for tracks left in the sand when sea turtles go ashore to nest, which has always been cause for celebration in the Cayman Islands. From humble beginnings, Cayman Carnival Batabano has grown from a small parade with homemade costumes and floats, to an international tourism attraction with hundreds of masqueraders donning professional costumes by local and international designers, parading down West Bay Road just steps from Cayman’s iconic Seven Mile Beach. A unique carnival that fuses culture and the arts via creative costumes, Caribbean music, local crafts, and a Food Festival worthy of Cayman’s reputation as the Culinary Capital of the Caribbean, Batabano is symbolically held the first weekend in May as part of the celebration and awareness of the start of Turtle Nesting Season. Today, the non-profit Cayman Carnival Batabano Committee (CCBC) is proud to use its platform to promote and support local turtle conservation efforts in the Cayman Islands. For more details, visit www.caymancarnival.com and follow www.instagram.com/caymancarnivalbatabano, and www.twitter.com/batabano_cayman.