20th Edition of Dining With The Saints 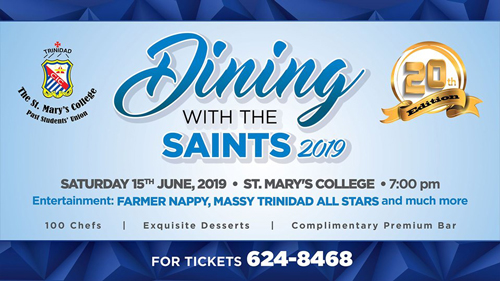 On Saturday, June 15, The St. Mary’s College Past Students’ Union will host the 20th edition of Dining With The Saints, an event that has evolved to what many regard as the best of its type in this country. The event features over one hundred chefs, most of whom are past students of St. Mary’s College. These guys come together every year to show off their culinary skills and claim bragging rights as they set out to raise funds for their alma mater.
Dining With The Saints has become popular because of the excellent standard of its various segments. Quite naturally, the quality of the Dishes served up by the chefs is a major attraction as is the wide range of the offerings. Once again, a number of high-profile chefs will be included in the line-up so that one can expect to be served by captains of industry, doctors, lawyers, pannists, etc., etc. The politicos will be there as usual, but on that night they will set aside whatever political differences they may have and instead have a friendly ‘debate ‘ centered around whose Dish is the best. Patrons can expect to’ taste the hand’ of Colm Imbert, Vasant Bharath, Terrence Deyalsingh, Mariano Browne, Stuart Young,  Pointe-a-Pierre MP David Lee, Maxie Cuffie and Gerry Hadeed. One can expect to see the Commissioner serving his Dish at his alma mater but, but he will be dressed in ‘mufti’. Not to be forgotten is Faris Al-Rawi.

A strong cast of artistes has been put together to provide entertainment at the event. The list includes Massy Trinidad All Stars Steel orchestra and one of this year’s most popular soca artistes, Farmer Nappy. Making a guest appearance will be The St. Mary’s College Steel Orchestra, which placed sixth in this year’s School’s Panorama competition.

Amazingly, all of the foregoing is available for just four hundred dollars. Tickets are available at the Past Students’ office (624-8468); from all members of the Organizing Committee and in Central Trinidad from Louis Ramdhanie (371-9193); in South Trinidad from Lighthouse and in East Trinidad from Gregg Mannette (678-7555)