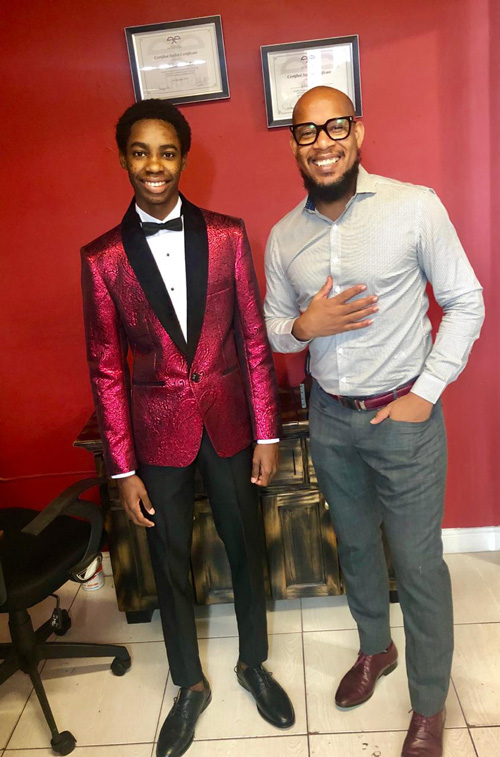 Photo: Ecliff Elie with Diego Martin Secondary Student
Port-of-Spain, Trinidad. July 10th , 2019 - Even fashion can play a pivotal role in the lives of Caribbean youth. Trinidad and Tobago menswear designer Ecliff Elie, concerned about the uphill battle faced by so many young men in T&T, for yet another year opened his heart to do something he felt would uplift a few of them, shining the spotlight on them, if only for one special night in 2019.
For a dozen teenage boys who were leaving the Secondary education system to continue their respective journeys, Elie and his team donated custom tailored suits for their graduation events. One student of Diego Martin Secondary was chosen by his teachers for the ultimate graduation gift from the contemporary menswear brand, Elie explaining that he had in fact given a speech at the school and engaged the teachers, asking them to choose a student they considered highly promising to be outfitted.

Separately, one young man who attended CUC College was also outfitted. He had performed well academically, despite the challenges associated with his single parent background. Over in sister isle Tobago, Ecliff also teamed up with the Pink Diamond Society to deliver a suit to a special young man, chosen by the group. 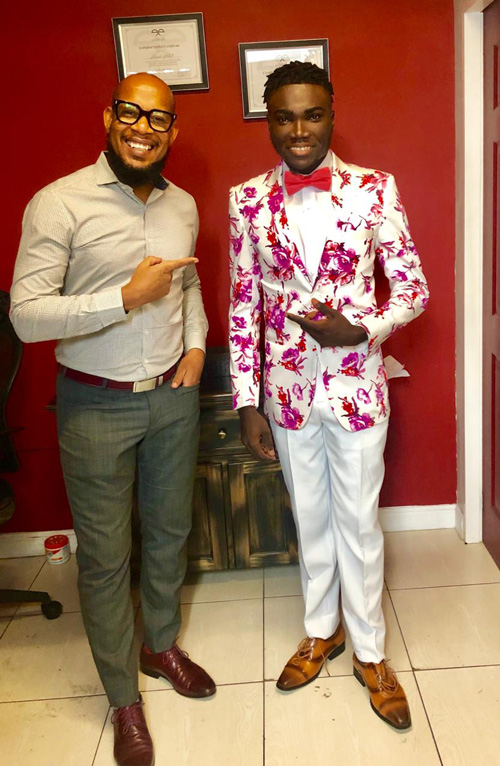 Photo: Ecliff Elie with CUC Student
Elie’s focus on fashion throughout his life catapulted him from his Arima, East Trinidad hometown, eventually opening him up to greater opportunities in the West of the island. His Rosalino Street, Woodbrook fashion house now caters to the needs of many professionals and men from all walks of life who desire the right fit, and look for various occasions. “I know how hard it can be to shoulder the many burdens that go hand in hand with adolescence. There’s a period of uncertainty faced by all youths and sometimes a little moral support can go a long way,” said Elie.
He has been a source of inspiration for many young people who’ve heard his story- his mother having been a single parent of 15 children and he being the last of the brood. Ecliff’s father passed away when he was just 5-years-old. “I know what it’s like to be in many of their shoes. My mother was forced to be the sole breadwinner after my father passed away. I know that’s not very easy for most mothers so because of my personal experience I will always try to help,” said Elie. He also called on society to think of the greater good. “I believe that if we each do what we can in our respective disciplines, to aid in at least one young person’s life journey, the Trinidad and Tobago we see now, can be uplifted and changed,” he said.

Elie’s menswear brand endorses positive solutions rather than an attitude of decrying the social problems faced in his native land. He encourages the fashion savvy and positive minded to follow @ecliffelie on Instagram for a view into his menswear catalogue.