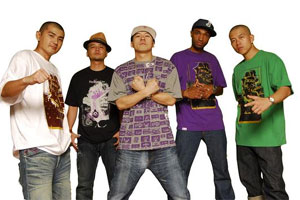 The Festival, in celebration of Crown's 17th anniversary, promises to be chock-full of excitement.  Billed as Japan's largest Reggae Festival, Yokohama Reggae SAI attracts revelLers from around the world.  The highly anticipated event boasts an intense roster of Japanese Reggae/Dancehall artists and surprise guest artists from Jamaica.  In recent years, the likes of Beenie Man, Tony Matterhorn, Voicemail and others have taken center stage.

Mighty Crown was founded in 1991 by brothers Simon and Sami.  The sound's undeniable grasp on the Reggae/Dancehall industry was culminated after their stunning victory at Irish and Chin's World Clash New York in 1999, where they defeated a roster of heavy contenders.  The world stood still as these non-Jamaican DJs mastered the art of sound clashing.  Winning such a coveted award thrust Mighty Crown into the limelight -- enabling their career to reach countless milestones including victories - Death Before Dishonor (World Clash Jamaica), U.K. Cup Clash, World Clash Antigua among many others.

Yokohama Reggae SAI was jumpstarted in 1995 by Mighty Crown as a means of celebrating their anniversary in the business and highlighting Reggae/Dancehall entertainment in Japan.  Each year, the festival grows in popularity and visibility. To learn more about Yokohama Reggae SAI, log on to www.irishandchin.com or www.yokohamareggaesai.com.