Rawlston Charles "The Man Behind The Music" 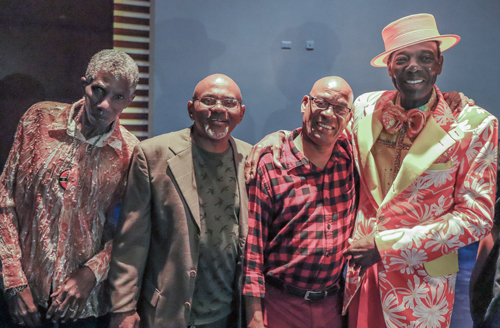 Photo: Soca DJ Daddy Scratch, Robin Foster, Pelham Goddard and Rawlston Charles
Rawlston Charles: know n for many years, as the “man behind the music” has released a biography showcasing his accomplishments to the calypso and soca industry.  His daughter Tina Charles who is a top American Basket Ball Player produce the movie so the world can now be aware of her father’s achievements.
In modern Trini society, few people may know of Rawlston Charles aka Charlie of Charlie’s Records on Fulton Street Brooklyn, New York. The reason he is based overseas and few people are aware of his accomplishments in developing T&T’s music industry. Just like how London based Chris Blackwell took Bob Marley’s music enhanced it and made it marketable for the overseas market so did Charlie except he started from the ground up.

Charlie born and grew up in the remote village of Delaford Tobago where at the time nothing was going on. As a young boy, Charlie looking for an opportunity to advance himself ran away from his home in Tobago to seek employment in Trinidad. He worked at Neal and Massy where he learned skills in auto mechanics. In the sixties, the USA was looking for skilled tradesmen and Charlie took the opportunity to go to America and work at Ford. His passion, however, was in the music industry and Charlie decided to open a record store. With the large influx of Caribbean people to the USA, there was an increasing demand for calypso records. At that time no one was distributing calypso music to the American market, plus the recording quality needed enhancement for the overseas buyers.

Charlie living in America understood what was needed to make the music more marketable. He decided to get involved with the recording and distribution of Calypso.  Like every great entrepreneur, his first productions experience some failure but he quickly learned from his mistakes.

The movie is about his musical passion for soca and calypso.  He traveled back and forth to Trinidad to work with the various producers, arrangers, and calypsonians. Having a good ear for the music, he knew the type of sound he wanted. He even had known scuffles with arrangers in order to get the right product. He then had to take the music to Manhattan to have it properly re-mastered. Deejays in Trinidad would look forward to the American press records, which sounded so much richer, compared to the locally pressed ones. On a hit record, the singer usually gets the praises but the people behind the music, the musicians, arranger, producer, and writer are the ones that make the difference. On Blue Boy’s “Soca Baptist” it was Charlie’s idea to included the bell and on Explainer’s “Lorraine” Charlie wanted to give a feeling of wanting to go back home with “taxi, taxi Airport Kennedy” and the plane taking off.

Eventually, Charlie was able to open a world-class recording studio upstairs to the record store on Fulton Street. He was able to buy over the building so soca and calypso now have a permanent home in the USA. Over the years Charlie has recorded every popular calypsonian from Sparrow, Kitchener, Calypso Rose, Lord Shorty, Shadow, Nelson, David Rudder, Tambu, Johnny King, Melody, King Wellington, Explainer, Super Blue, Crazy, Duke, Swallow, and the list goes on and on.  Working with Pelham Goddard together they have produced 14 Road Marches Titles.  Some popular and everlasting songs coming from Charlies Records are Sugar Bum Bum, Soca Baptiste, Ethel, Lorainne, Fire in the Back Seat, Subway Jam, Disco Daddy, etc. One of the biggest selling calypsos recorded at Charlie’s Studio was Arrow’s Hot, Hot, Hot, however, Arrow realizing it’s potential bought over the rights to the song. Also recorded Calypso Rose, who is the first lady to win the Calypso Monarch and Road March titles. Rose won the Road March titles in 1977 with “Give me more Tempo” and 1978 “Come let we Jam”.  The studio became so popular that American rap artist started to record there like Run DMC, Fat Boys and Doug E Fresh with "The Show" and "La Di La Di".

The band “Charlie’s Roots’ got its name from Charlie. They were originally a bunch of studio musicians and while in New York they decided to form a band. Charlie was the person who sponsored their musical instruments and they named the band after him.

Soon it will be almost 50 years since he opened the store and Charlie with pride still dresses like a calypsonian. Every day he goes to the store wearing a big hat and flamboyant long sleeve shirt and jacket. He believes in maintaining the calypsonian image and remains very proud of it. He realises the market has changed, records and CDs don’t sell anymore. His devoted customers have matured so he now provides chairs for them to sit and ole- talk about Trinidad and Tobago. The music has also changed. Still, he believes the fundamentals in music will never change. He knows for a song to be a hit and to have the long-lasting appeal it must have a nice sing-along melody like Nadia Batson ‘So Long’.

He knows people will come to like what the radio feeds them. The radio stations have the power to influence the public. He feels it is the responsibility of the radio stations to play good music for the development of our country. No one will fully understand the troubles he had to endure to get the music played, even on Caribbean Radio Stations where he had to compete against a Jamaica Market with Jamaican Disc Jockeys. However, the struggles of those of the past have made a success path for the new artist to follow. Yet he feels unlike Jamaicans little recognition is given to the pioneers of our music. Trinidad and Tobago should honour their cultural ambassadors who have paved the way for future generations.  The reality is they wait until the artist dies then tribute their songs for a few minutes on the radio. Yearly on Labour Day Weekend, outside the record store, he has a free block party where calypso artist can perform to a large audience.

Please note Charlie's video will be shown at the Botanical Garden at 630pm on Thursday 22nd August 2019.  It is one of the Carifesta Short Films.  Admission is Free the public is invited.