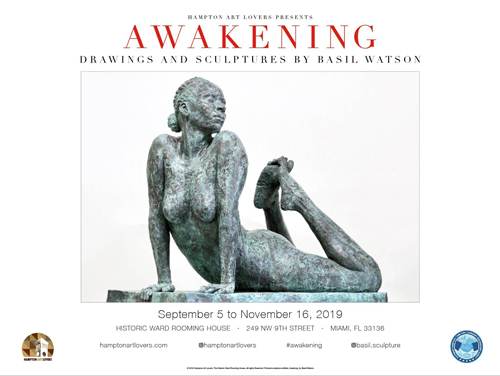 Miami, Fl-September 4, 2019 - Committed to celebrating and promoting diverse cultural roots through the arts and culture activities, and by promoting African American and Caribbean artistic talent, Hampton Art Lovers(HAL) once again will open another exhibition September 27, 2019 at the Historic Ward Rooming House(249 Northwest 9th Street Miami, FL, 33136). "Awakening" is the solo exhibition of works by Basil Barrington Watson featuring sculptures and sketches by Basil Watson.The show will run through November 16, 2019. The Southeast Overtown Park West Community Redevelopment CRA(SEOPW) is the sponsor for the show. The gallery hours are daily 1pm-6pm, Wednesday through Saturday. Private showings can be made by visiting //www.hamptonartlovers.com/events/basilwatson-awakening.

Born in Kingston, Jamaica, and the son of internationally renowned painter Barrington Watson and the first student of color to attend the Royal Academy in London, it was a natural progression for Watson to study at the Jamaica School of Art. Upon graduation, he went on to establish a successful career as Jamaica's leading sculptor. The Government of Jamaica awarded Basil the Order of Distinction (Commander) in recognition of his contributions in the field of art. The most notable of his achievements include having monumental works on three of Jamaica's primary universities and signature works at the two of the Island's major stadiums. 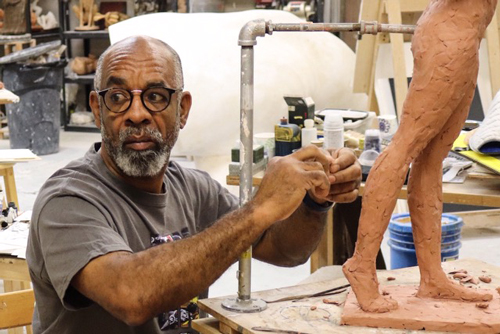 Historically referred to as “Harlem of the South”,  Overtown was once renowned as the center of Black culture and entertainment for the South, reflecting the energy of the community that found expression in the many cultural forms that existed there such as theatre, music, art, and food.  In furtherance of the implementation of the Historic Overtown Culture and Entertainment Master Plan, this exhibit is a preview of Overtown once again becoming a global destination of unique culture, history, and entertainment.

"The human form is often forgotten as a true artistic subject without the vanity that so often it has become in the 21st century. Basil Watson reminds us all through his amazing ability to capture the human form that it's the spirit that lifts the form to life. That is the "Awakening" he illustrates and thus the title of our exhibition." states Christopher Norwood, co-founder of Hampton Arts Lovers.

After emigrating to the United States in 2002, Watson established his home and studio in Lawrenceville, Georgia, right outside of Atlanta. Having continued the steep climb to international recognition, he has completed major works in China, Guatemala, and in various States within the United States. Additionally, over his 40-year career, Basil has completed several major commissions for multiple governments and organizations all over the world. 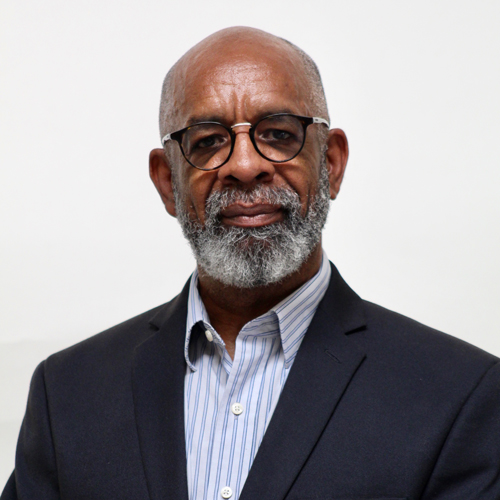 Most recently Basil created monumental works for his island home honoring accomplished Jamaican athletes, like Olympic champions Usain Bolt, Asafa Powell, and Shelly-Ann Fraser-Pryce along with others, and cultural icons like The Hon. Louise Bennett as well as the National Heroes. Basil is currently working on a 12-foot sculpture of Dr. Martín Luther King Jr. commissioned by the City of Atlanta.
Watson's work focuses on the representation of the human figure. Through the exploration of the language of the figure, he explores the emotions and spirit of his subjects, seeking the naked truth above all. Watson has worked assiduously at developing technique, and knowledge of the human figure, but most of all, an intrinsic understanding.
About Hampton Arts Lovers

We inspire the appreciation of African-American Fine Art. We honor the heart and soul of Fine Artists and make their work discoverable by anyone who loves art. Hampton Art Lovers believes that understanding culture, whether our own or others' is becoming increasingly vital in the modern world. We live in a knowledge economy where demonetization is rampant. It is a world in which technology can render previously expensive and/or inaccessible products and services much cheaper-or even free. Learning hard is the knowledge economy currency, and lovers of art do this naturally. Hampton Art Lovers believe that through culture and education, we can improve our communities and communities all over the world. Art Lovers

The Ward Rooming House is owned by the City of Miami SE Overtown/Park West CRA and operated by Hampton Art Lovers; the Historic Ward Rooming House Gallery has a rich socially significant history. It is an honor to bring this exhibition to this space. Built in the 1900s by an African-American family (Shaddrack and Victoria Ward), the Ward Rooming House served as a home for both African American and Native Americans who needed a safe place to sleep at night. It was designated a historic site by the City of Miami in 2006 and fully restored in 2010. Now it serves as a gallery and event space. Built in the era of Overtown's historic heyday, when it was known as "Colored Town," the Ward Rooming House stands as a tribute to the history of the oldest historic black community in the City of Miami. As one of the few remaining buildings of its time, a seemingly ordinary rooming house becomes significant for a larger role, it serves in preserving the history and architecture of Miami's Black community. 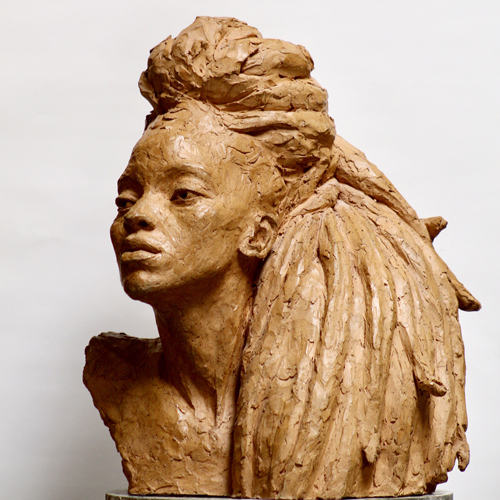 Exhibition Times: Wednesday to Saturday from 1pm – 6pm and by appointment.