By Idea Ventures
Published on 02-Sep-19
CARIBBEANTALES announces the twenty-one (21) filmmakers that will take part in the Tenth Annual CaribbeanTales Market Incubator (CTI) in partnership with The Caribbean Development Bank, Ontario Creates and Telefilm Canada, and with support from the National Film & Video Foundation of South Africa.  At the annual Big Pitch, they will compete for prizes that will include an award of $10,000 for Best Caribbean Project.

CARIBBEANTALES announces the twenty-one (21) filmmakers that will take part in the Tenth Annual CaribbeanTales Market Incubator (CTI) in partnership with The Caribbean Development Bank, Ontario Creates and Telefilm Canada, and with support from the National Film & Video Foundation of South Africa.  At the annual Big Pitch, they will compete for prizes that will include an award of $10,000 for Best Caribbean Project.
Celebrating its tenth anniversary this year, CTI is a development and production hub for international producers.  It aims to increase the volume of compelling world-class content from the Caribbean Region and from the world.  This year's filmmakers come from Canada, Cuba, Trinidad, Jamaica, Belize, Haiti, and South Africa. Sixty percent of the selected filmmakers are female creators and all are producers of colour. 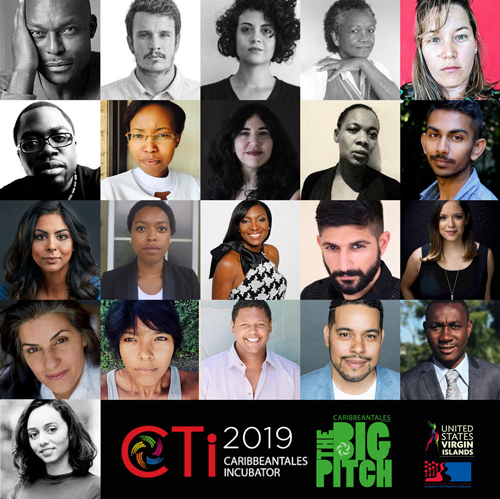 Photo: Photo from left to right. First Row: Frank Carvajal, Aileen Reyes,Sylvia Vollenhoven, Rosa Maria Rodriguez. Second Row: Ayanda Halimana, Reem Morsi, Bridget Pickering, Shant Joshi. Third Row: Folasewa Babalola, Patricia Bebia Mawa, Stephen Hadeed Jr., Teneille Newallo. Fourth Row: Gabrielle Blackwood, Ron Oscar Sierra, Leon Lozano, Massena 'Bougon' Cesar. Fifth Row: Julius Amedume, Jimmy Jean-Louis
Frances-Anne Solomon, CaribbeanTales' CEO said: “We are thrilled to be celebrating our tenth year of bringing compelling projects from some of the most talented producers in our wide Diaspora to the international market -- enabling these filmmakers to find partners and funding, and to connect with, and be seen by, audiences worldwide. This year we are focused on forging international relationships and co-productions. I am looking forward to building on this important milestone in our growth, to create sustainable co-ventures between Canada the Caribbean, and the world."

After receiving a record-breaking number of applications, projects were assessed by a team of industry professionals. From these, eleven (11) projects were selected, that range across romance, drama, thriller and speculative fiction.

Haitian film star and producer Jimmy Jean-Louis brings his feature psychological thriller steeped in Haitian folklore, Mother Water.  Jamaican cinematographer and director Gabrielle Blackwood's Kendal is a coming-of-age period drama, set in 1950's colonial Jamaica. From Trinidad and Tobago, Teneille Newallo and Stephen Hadeed's Soucouyant is a supernatural Amerindian thriller, set in the time of Christopher Columbus. Canadian director Reem Morsi's Fish  is a speculative fiction television series  that delves into the dark side of greed, betrayal and monsters; while Sylvia Vollenhoven's feature drama Buckingham Palace tells the story of District Six, a Capetown slum in the 1960's --and what happens when the bulldozers come. And from Cuba, Rosa Maria Rodriguez brings her horror feature Nara, that tells the tale of two sickly siblings confined at home, who succumb to their darker natures. 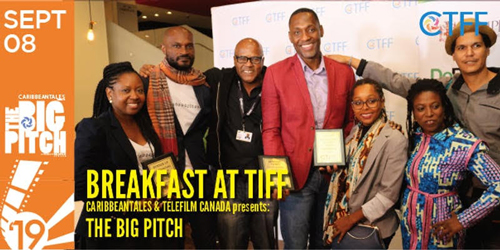 On the morning of Sunday September 8, 2019, the eleven (11) teams will pitch their projects to a room full of industry insiders enjoying a sumptuous Caribbean breakfast at TIFF's Luma Lounge.  Co-presented this year with the U.S. Virgin Islands, the Big Pitch is produced in partnership with TIFF, and supported by Telefilm Canada. It is a light-filled morning exploring the talent and creative ingenuity of international filmmakers.

The breakfast pitch competition will be followed by the REDHOT Mixer, co-presented this year by the U.S. Virgin Islands. The mixer is CaribbeanTales' annual TIFF networking event where a diverse audience of industry insiders will mix with talent and community.