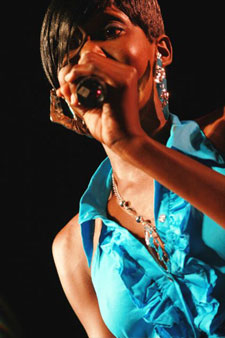 Monday, April 20 – Kingston, Jamaica: Last week’s (April  11) Magnum Kings and Queens of Dancehall show was a true depiction of the difficulty associated with making it in the dancehall world as several of the nights favourites stumbled on their lyrics.

This prompted Magnum Kings and Queens of Dancehall Judge Skatta to comment:

“This is what real dancehall is live, when you come on stage you have to be prepared and ready for anything”

Catching up with Skatta after the show he continued: “You can never predict what will happen on the stage and the contestants have to be prepared. This is the nature of dancehall and I feel good that a show like Magnum Kings and Queens of Dancehall can give the people a real feel at home of what it takes to become a real artiste”.

Poor and Boasy, one of the contestants who had trouble with his lyrics was quite apologetic to his fans while at the same time vowing to come back better than he did on Saturday. “Is a learning experience every week, mi jus have to go back to di drawing board an mek sure seh mi fans dem an di people who a watch mi no disappointed again”. Commented the Street boy turned Magnum prince.

Nazine also had to rewind his In Love tune and come again as he could not seem to remember his lyrics. The crowd favourite is pledging to come hard this week in an effort to redeem himself. He asserts: “I am coming fully prepared this week even though we never rehearse the tune last week we coming to teck it’ back this week cause the people dem a depend on we fi give dem some positive music”

Celebrity also had an attack of nerves on the Magnum Stage last Saturday while belting out her number Ambitious Woman. The princess, speaking to Fancy Cat backstage was still confident while at the same time seeking the forgiveness of the viewing public.

Assistant Producer of the hit show Sanjay Ramanand in not surprised that so many of the contestants seems to have gotten week Kneed. He comments: “Every artiste will face moments like these in their career and the true test will be how they are able to bounce back”.

Magnum Kings and Queens of Dancehall continues to bring authentic Jamaican talent to the Jamaican stage. Every week brings a new level of excitement and quality entertainment. Watch this Saturday live on TVJ at 9 p.m. for more.