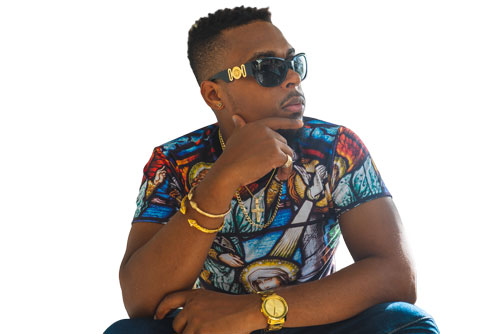 Port-of-Spain, Trinidad. November 27th, 2019 - He’s challenging the norm, challenging the sound of Soca even, but humbly, Soca’s new kid on the block, Lucrativ, is making it abundantly clear that he’s in it for the long haul. Back to back music releases in less than two months, cements this relatively new artiste in a place many often hesitate to stand- often too timid to show up those who’ve run the game for many, many years.
Ambitiously, Lucrativ has released yet another Soca track ahead of Trinidad and Tobago’s carnival 2020 season. The new single, ‘No Limit’ follows a media rounds made less than two months ago, when he familiarized soca music lovers with his first 2020 contribution, ‘Cyah Tell We Nott’n.’ Excited to maintain the momentum of his initial introduction to the upcoming season, the young artist struck the iron while hot, teaming up with producer, Yung Seeche, before having his track mastered by Sherriff Music.

The new single offers music lovers and carnival connoisseurs an untraditional sweetness that can be compared to nothing that’s presently bubbling on the airwaves. “I’m not afraid of taking chances. This single is essentially a play on words, expressing exactly how I feel about music and creativity,” said the artiste. Lucrativ says he hopes to be a part of an industry where creativity can be freely expressed and affiliation and status have no weight on the development of any artist in the business.

In the past few years a number of young, up and coming entertainers have taken a similar stance. Nailah Blackman is one of the acts leading the way with a succession of Soca hits that feel like curve balls to the traditional sound of the Soca music genre. Fellow young artistes, Erphaan Alves and Voice are also making waves, shocking soca lovers the world over with their new age sound and savvy marketing and promotional skills. Songs like ‘Honest Dollar’ by Voice, released ahead of Carnival 2020 and not forgetting Erphaan’s "Soca Global,’ which was the bridge release for the young artist between Carnival 2019 and the post carnival period, delivered a unique appeal to fans, something Lucrativ aspires to do, via his releases as well. “These artistes have made a major impact on the gene. They’ve stepped out of the box, giving the world their personal styles and sounds that have proven beneficial to not just their individual teams, but it’s opened up a window for new artistes like me, to be considered in the mix,” he said.

Lucrativ’s team has been putting in the work. Videos are almost always mere weeks away from any song’s release in his camp, the artiste explaining that he firmly believes in the power of visual marketing. “We must be committed to delivering quality. My team gets that, and we’re not about to drop the ball when it comes to showing off the essence of our music and vibe here in T&T and the Caribbean; too many incredible artistes have paved the way and shown us how it’s done, for us to drop the ball now,” said the entertainer.

With several other releases also making the rounds to DJs and other soca pundits, the excitement is building ahead of the carnival season in T&T. “I’ve worked with Prince Pronto who is responsible for producing the Bang Bang riddim. My single on that riddim is called, ‘No Behavior,’” said Lucrativ. He explained that a J’ouvert anthem called, ‘Paint’ produced by Kyle Phillips, has also been unleashed. “That’s on the Anansi Riddim and it’s got an urban flair to it,” he said, excitedly.

Ready to show up in 2020, Lucrativ is urging fans of Soca to be a part of his journey by following LucrativTT on Instagram and Facebook. He’s promising nothing short of excellence as he strives to rep hard for the soca genre wherever his journey takes him.