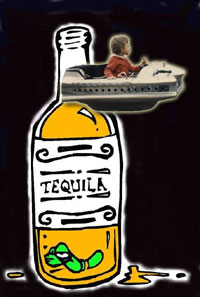 Today’s topic is pretty random but since Cinco de Mayo is upon us and Swine flu is dampening what should be a lovely time of drunken debauchery, I thought I would talk about good-ol-te-qui-la.  The Mexicans need a pick me up.  All this talk about Swine flu I know has the Rastas saying, “Yuh see, all yuh, we dun tol yuh all about d ras clot pig and now looooook. Ital is vital” and you know all the Jewish people saying the same.  Poor little is pretty much shut down and spirits are low.  This makes Cinco de Mayo even more important to celebrate this year.

For those of you who don’t know what Cinco de Mayo is, it’s a regional holiday in , primarily celebrated in the state of commemorating the Mexican army’s defeat of the French forces at the of …to other countries, Cinco de Mayo means skydiving in and air guitar competitions in the .  All these things usually end in drinking A LOT…mostly tequila and beer.  I wish I could like tequila but to me, it tastes like wet cigarettes. I’ve tried doing shots but after doing one or two I get this terribly twisted look on my face like I’ve had a small stroke because of the rancid taste…lime and salt don’t help contrary to popular belief.  I think the lime and salt were brought in to just focus on something other than the wet cigarette taste.  I have tried Patron but something in there unleashes my inner MAD Red Woman and my evenings usually end with either ducking police and doing something illegal! J

Ah yes, now the worm.  WHAT D HELL IS UP WITH THAT?  Why a worm in the tequila?  Why not a strawberry? A piece of mango? Anything but ah worm!  I was reading some info on this and saw that they most Mexicanos use “weevil” worms in their Tequila.  You guys remember what weevils are right? They are those lovely little worms that grow in flour when you keep flour or cereal out in the heat! Ewwwwwwwwww.  I knew this one breds who ate the worm and swears he hallucinated…well if I ate some weevils, I’d be hallucinating too, seeing all types of things…me throwing up in the bathroom…me throwing up at the table….all type of ting. Steuuuupppps

Regardless of all that, needs our help more than ever.  Sooo this Cinco de Mayo, get out there and buy a bottle of Tequila, some Coronas, some Mexican brew and take a break from good ol Mr. Walker.  Support d Mexicans and celebrate!

…I still want ah piece of pork though J