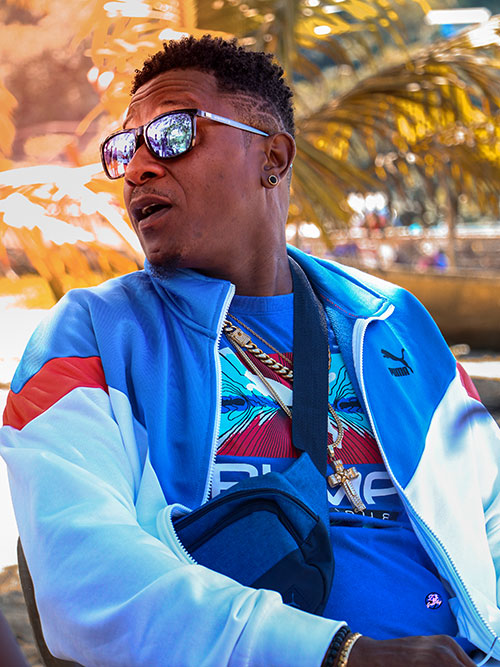 Photo: Saint Lucian recording artist Infinate
If you have been lucky to experience “Bakara”, the first big recording to put some respect on the name and talent that is Saint Lucian recording artist, Infinate, you would have no doubt been privy to his versatile flow and intricate lyricism. ‘Bakara’, a collaboration between Infinate and Saint Lucian International Recording Hip-Hop artist, Kayo, received both National and International acclaim gaining over one million streams on digital streaming platforms since its 2015 release.
Exactly 6 years later Infinate seems to have risen from a musical hiatus to bless us with some fire for his first release of 2021, entitled “Unique”. The track produced Arkim Krome Lynch of Krome Production, features Saint Lucian recording artists Jozzy (Joseph Clairmont) and Rashaad (Rashaad Joseph).

Jozzy, who is known for his witty lyricism, has released some of the best “Dennery Segment” music (genre of Saint Lucian music) that Saint Lucia has had to offer in recent years. His fluidity as an artist is put on display as he does justice to this Dancehall track giving the song that additional Casanova feel with a “rudebwoy” edge.
Rashaad, who was first introduced on the Saint Lucia musical scene as a gifted saxophonist, has evolved into multi- talented songwriter, producer, and co-founder of the record label, Ocean View. Rashaad’s melodical distinctive flow complemented by his laid-back “Island Bwoy” aura, exhudes “good vibes only”.

A key member of Infinate’s team, who does not hesitate to credit Infinate as the chief catalyst in his musical career, is his younger brother Johann “YogidaProducer” Deterville; more affectionately known as “Yogi”. Yogi, a Saint Lucian born, Toronto based, multiple Juno award nominated producer, mixed and mastered “Unique”. Some of his noteworthy works include productions on Kehlani’s “It Was Good Until It Wasn’t”, Jessie Reyez’ “Before Love Came to Kill Us”, and most recently, soundtrack and sound production on Sony’s “Spiderman: Miles Morales” video game for PlayStation 4 and 5.

Despite Infinate’s forthright attitude and uncompromising Alpha-like presence; especially when he is in one of his deeply pensive or focused states (“Holdin’ a meds more time”, as the artist terms it), interacting with him will reveal a humble human being, passionate about his community; especially the youth.

According to Infinate getting to work with younger, talented, budding artists is one of the milestones of his musical journey. Infinate dedicates this track to the people of his community of Anse-la-Raye and other such grassroots communities in our Caribbean diaspora. It is only in discovering our “Uniqueness” and individuality that we can come to the realization that we are priceless beyond recognition despite all poverty and oppression—through all the hardship and poverty, we can still rise.

The video was shot in the West Coast communities of Anse La Raye (Infinate and Jozzy’s hometown) and Canaries, Saint Lucia by EPS – Production. It’s a depiction of how our individual talents and uniqueness can make us resilient in these oppressive situations--lights in the darkness. We’re UNIQUE.