Jadel takes over the Airwaves 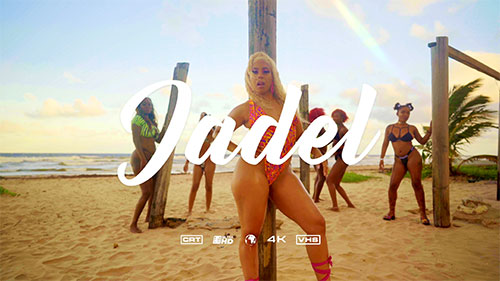 Multi-hit recording artist, Jadel, is ready to take her latest music to the world. Currently in Trinidad, Jadel has three songs in heavy rotation, “Yuh Man” off the Queendom Riddim, “Up In D Party” off the Buddy Pass Riddim, and her newly released project off the No Limits Riddim entitled “Spice It Up.” Listen to them now at https://ffm.bio/jadel
Jadel’s reign of consistency began January 1st, 2021, when she released her single and music video “Deserve It All”, written by Kit Israel and Jardine “Jadel” Legere, and produced by CL Productions. “Deserve It All” not only reached over four million views to date, but it has also made its way to international TV networks MTV Base in South Africa, MTVU in North America, and BET Jams in North America.

On January 18th, 2022, Jadel had the opportunity to highlight her music Live on air at 96.1 WEFM in Trinidad, for their annual Carnival Zone segment, during the “Madder Drive” alongside Soca stars/hosts Shal Marshall and Viking Ding Dong. Highlighting to fans her personality, energy, and vocals as she performed her hits “Yuh Man” and “Up In D Party.” She also have listeners a treat with the brand-new release “Spice It Up,” dubbed “Soca Zess”, which is becoming a steady underground favorite among Zess lovers and Soca lovers alike. Watch it here at https://www.instagram.com/tv/CY7lMXEv3p4

Soca fans and industry insiders around the world are beginning to noticed and admire Jadel’s quality, consistency, and impact on Soca music. Ladypatgarcia “If our regular carnival was on, YOU would have undoubtably been the Soca Star most in demand...” Curtis Sandassie “Jadel continues to perfect her craft and build up her catalog of music strong…” Above6ft “Everyone have their time n season, Jadel, I commend you… I hearing and seeing some Onika Bostic mannerisms, keep it going…” DINANATH RAMJIT “Jadel you are an amazing performer. Well done.” Kandy 323 “I love this.... Jadel you and your team did such an amazing job on this video and song. Only up the ladder after this.”

Jadel has finished filming a music video for “Up In D Party” which it set to make its debut on March 25th, 2022, on her official VEVO channel Jadel Music, Apple Music, and Tidal. “Up In D Party” will also see a Network debut on BET Jams. She is also featured on the Creme Brûlée Riddim project by Rebel Muzik and Gervais Music featuring Rae and Preedy. She is also shooting a music video for her first official single of 2022 entitled “Hot Topic (Gyal Wine)” produced By CL Productions, which was recorded during the summer of 2021 but will finally see its debut to the world this May. Expect the unexpected as she continues to take over the airwaves and gets ready for her 2022 North American and European tour starting with Toronto’s Soca or Die.