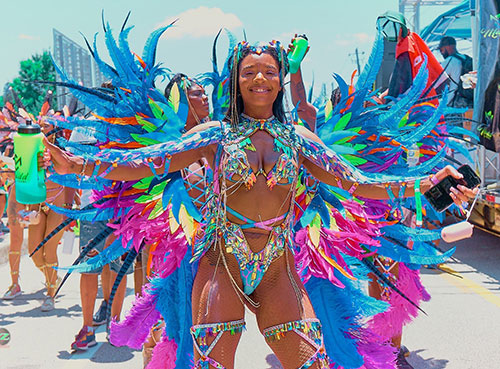 Due to cancellations of carnival activities in neighbouring Dekalb County, the 2022 edition of Atlanta Caribbean Carnival marked the return of ATL’s beloved large Mas bands to the downtown experience. These include the bands:- We Kinda Ting, Mas with Panache, Poison Mas, Madd Colors, Inferno Mas & ReggaeMatic.

With these developments came an overwhelming amount of attention, interest and patronage from the Atlanta Caribbean Carnival masqueraders, displaced participants from the cancelled Dekalb events as well as attending local & international carnival lovers. 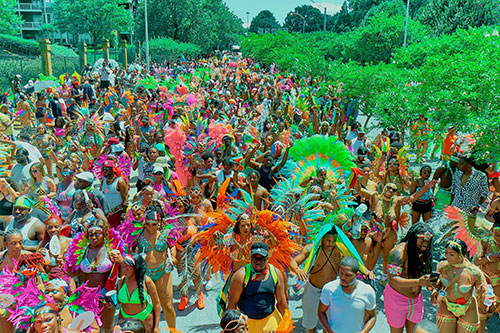 Photo: The 2022 edition of Atlanta Caribbean Carnival marked the return of ATL’s beloved large mas bands to the downtown experience.
This major 2022 Carnival response left some persons unable to enter the parade ending spot due to capacity limits at the downtown Atlanta Carnival festival village i.e. Central Park and with some other eager individuals finding creative ways to access the vendors and live entertainment in the enclosed venue.

This unprecedented and unpredictable occurrence is indicative of the power Soca music and Carnival culture carries and of the desire by the Caribbean community and its supporters to indulge in the festivities after a two year absence.

Regarding the exceptional levels of enthusiasm for this year’s events, ACCBA President Patricia Henry shared ‘I believe this was driven by everyone’s desire to get out, to benefit from the mental release that Carnival brings and to reconnect with loved ones and their cherished culture. For Carnival 2023 we’re aiming for bigger and better and we may potentially have to seek a new festival village venue to accommodate all our loyal and new participants and patrons’.

Beyond the logistical challenges that come with the staging of any major event, the 2022 carnival featured many notable highlights such as Fulton County, Georgia District Attorney, Fani Willis and Vincentian Soca Star Skinny Fabulous serving as parade Grand Marshalls, energetic performances by T&T’s Nadia Batson, Grenada’s Tallpree, Barbados’ Edwin Yearwood and USVI’s Pumpa as well as J’ouvert and Soca Bruch party events produced by the ACCBA. 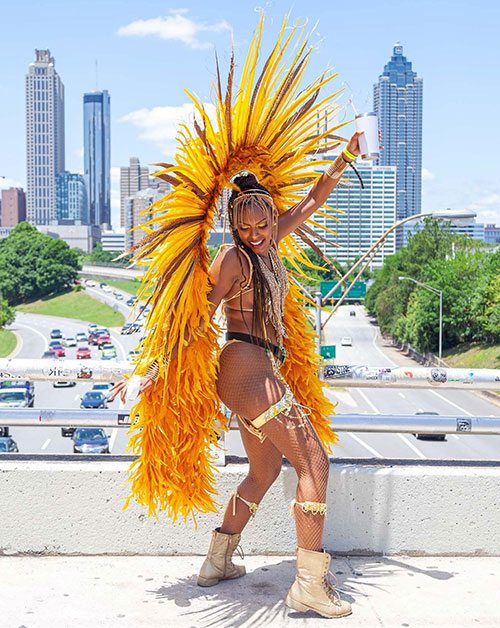 Photo: This past Memorial Day Weekend all eyes were on the Atlanta Caribbean Carnival in downtown Atlanta.
Additionally, several attendees and masqueraders at this year’s Atlanta Caribbean Carnival shared positive sentiments with regards to the weekend’s activities with some expressing that the annual festival even rivals Miami’s Carnival in terms of vibes and amenities.
Even though the ACCBA are not responsible for the actions of every member of the Caribbean community, every parade participant or spectator, the board's main objective is and always will be to display an authentic representation of Caribbean culture and festivity in a secure environment and with the continued support from the city of Atlanta and all the festival's dedicated sponsors, the association promises to deliver a safer, more spectacular and streamlined parade execution for 2023 and beyond.

The ACCBA endeavours for the city to have one unified Carnival parade experience on display in the downtown core and continues to use this platform to promote the culture and equality for Atlanta’s Caribbean community in mainstream spaces and in general.

For further info please visit www.atlantacarnival.org AND by following the brand on social media via: Facebook: www.facebook.com/AtlantaCarnival & Instagram: www.instagram.com/officialatlantacarnival/