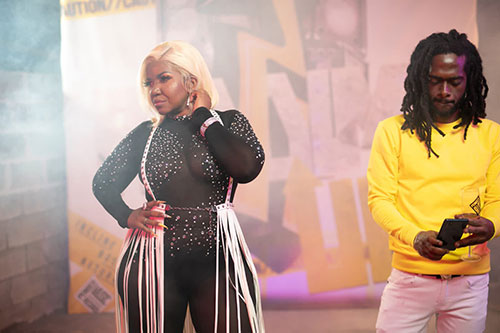 Port-of-Spain, Trinidad. June 14, 2022 -- Trinidad and Tobago is never short on effective ways of enhancing the music product. On Thursday, June 9th, producer, Randal Alexander of PengCo Music Records, unveiled a practical method of ensuring that music creators truly reach audiences online and via the platforms they frequent.
Alexander and his team have been on a mission to see artistes who walk through their door at PengCo Music, reap holistic rewards. “We’re doing something we call, ‘Viewz’ via the iENT digital platforms- Youtube, Facebook and Instagram,” he explained, noting that partners like entertainment platform, Ebuzztt.com, Promo Solutions, Guinness and Red Box Illustrations have come on board to ensure that the deliverables are met.

The streaming event will take place each Thursday from 8pm, for a three - month period, via the iENT social platforms, and will feature artistes like Frequency, King David, Lady Lava, Keturah Gamba, Orlando Octave and others who have received production services from PengCo Music. The weekly showcase will also highlight musical guests that have worked with PengCo Music over the past decade. “When the pandemic started, music became an elusive goal for many. In an attempt to stimulate the industry, I first dropped my production cost by 70%. In doing that, I began meeting so many talented artistes who were under the radar,” said Alexander. After delivering approximately 300 new singles to these new artistes, Randal said he made a necessary observation. “I noticed that most artistes were really struggling to get their names out there. The reasons differed, but the most common reasons were a lack of knowledge and a lack of means,” he explained.

Alexander began teaching these artistes, equipping them with valuable knowledge and insight that they may never had known before. “I tried to offer them all information and tools that would transform their careers. A small group of these artistes were very diligent. They applied themselves, worked hard and persisted and because of that, Viewz was created.”

Viewz will be used as a platform to generate much desired traffic to the content delivered by these very talented entertainers, according to Alexander. The campaign’s goal is to generate 400,000 viewers per month to the weekly showcase. By the end of the showcase, the goal of promoting these artistes and their music, will be realized.

In April, PengCo Music unleashed a riddim called, Riddim Up, which brought some of the artistes that will be featured on Viewz, to the forefront. Their songs and many other singles by these underground artistes, will be showcased throughout this brand new musical mission.

For more details on this initiative, follow @pengcompany today.