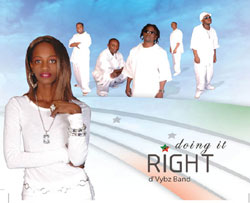 Basseterre, St.Kitts (May 22nd 2009):- St.Kitts Soca diva Shakki will be journeying to St.Vincent for that islands very popular carnival celebration known as the Vincy Mas.

The lead vocalist of the exciting d’Vybz band will be taking the Vincy Mas by storm as part of the Caribbean Soca Explosion event.

According to the organizers of the event, the Vincy Promoters Inc., the show is expected to be the highlight of the Vincy Mas celebrations. The show will feature many regional artistes including Zoelah(SVG), Lava Man(Gre),Bomani (SVG) among others.

According to the organizers, the show is an annual event that normally features some of the regions top soca acts. Shakki was invited as a result of her recent spate of  hits with d’Vybz  including DJ Play “Having a Ball” and “Like Doves which have all been featured on various recent regional soca compilations.

Shakki is also expected to be on this years St.Kitts  Music Festival line-up. This will be her 2nd appearance on the annual event , having performed in 2000 as a  member of the Grand Masters.

The Soca diva will be making a number of appearances in the upcoming months as a member of d’vybz  in Nevis,Anguilla,Statia and Tortola.

Despite being just 3 years old d’Vybz has become one of the up and coming major musical forces in the Caribbean having belted out hits like DJ Play, Like Doves,My life and Turn it Up. The band’s current album “Doing it right” and the band itself is expected to be featured on  Caribbean Soundtrack TV Show with Sonya Sims and according to group manger Wallis Wilkin the band is in process of producing their very first music video . A collaboration with one of Grenada’s top soca artistes is also in the works for d’Vybz .

The Caribbean Soca Explosion event takes place on June 6th at the Victoria Park in St.Vincent. Vincy Mas kicks off on May 30th with the Miss SVG Show and runs until July 7th with the Mardi Gras celebrations.