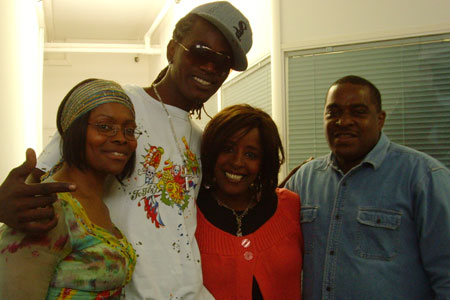 Brother B performed for the first time in London for the Launch of Grenada Carnival last weekend.  This event was held by Grenada’s Minister of Culture at a venue in Southall, UK on the 23rd May 2009.

Brother B started his London trip with a performance at a club in Central London where he performed a few of his hits and released his new track ‘Whola in front of fans.  On Friday morning Brother B made an appearance on Sky TV with presenters Pam Gentry and Daddy Ernie for a live interview.  Friday evening Brother B wooed fans with a series of live interviews on several London radio stations.

Saturday afternoon the artist took part in the Grenada Spicemas lime in the Park alongside other Grenadian artists & UK based DJ’s.  The evening was the Launch of Spicemas in London, a showcase in Southall where a host of artists including King Ajamu, Fourbrass, Grenada’s current Soca Monarch Kings Luni Sparks & Electify took the stage with the Riddum Mix band.  Brother B performed hits, ‘Bad Like We, Little Wine, Mama Cry, Give it to you, Pork and No Horn’.

The London visit was a huge success with fans and for Grenada’s culture.

Brother B is performing this weekend at Grenada’s Rock the Spice festival alongside Shaggy, Destra & Mr Killa.

Videos of Brother B’s UK appearances will be shown on repeat on Sky TV and online on You tube.

For more details on Brother B check www.myspace.com/1brotherb