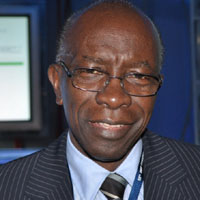 Friday, 5th June 2009: With the first half of the 2009 Digicel Kick Start Clinics concluded - and the second half about to kick off next week in Haiti - the President of the Caribbean Football Union (CFU), Austin “Jack” Warner, believes that Digicel is laying the right foundations for the development of the game in the Caribbean.

Warner, who has just been re-elected to serve as FIFA Vice President for another 4-year term on the Executive of the World Governing Body, said he has been following the Digicel Kick Start Clinics since they started and that they have been a real hit in Jamaica, Barbados and Suriname.

“I think these are the kind of foundations that we have to lay if we are to develop football in the region. I know this takes a great deal of commitment – and I want to commend Digicel for taking the time and making the effort to make this possible. Head Coach John Barnes is a real legend and icon who these young people can look up to. All in all, I am very impressed with what is happening with the Digicel Kick Start Clinics.

Warner, who is also the President of the CONCACAF and has been responsible for shaping and taking football to greater heights in this Confederation, is pleased that the Digicel Kick Start Clinics are targeting a younger age this year – namely, the under-16s.

“I am very happy that this year’s Digicel Kick Start Clinics are aimed at a younger level, because the younger they begin - the less chance there is of the evil and negative aspects of football being ingrained in the players. It’s best if we can catch them from a young age - the younger, the better. The fact that the FIFA youth programs are now being geared around this age group is also useful.”

The pressure is on to be one of the eight lucky players from across the Caribbean to be selected by Head Coach John Barnes to attend a one week training camp at Sunderland AFC in September.

The Digicel Kick Start Clinics are going Bigger and Better this year by making their debut in Central America.  Clinics are scheduled to be held in Panama, Costa Rica, Honduras and El Salvador throughout the month of August with the lucky chosen players earning the right to go and attend a one week training camp at Liverpool FC in October.