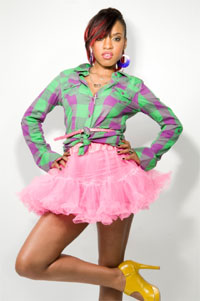 While in NYC she was a special guest at the grand opening of the Sunglass Hut flagship store in Midtown Mahattan along with some of New York's most fashionable and influential trendsetters. Natalie had the opportunity to do numerous interviews with media outlets including Fader Magazine, World Flavas Radio and Pat McKay on Sirius Radio.

The highlight of the hectic week was definitely her stellar performance at Federation Sound's 10th Anniversary show at Club Santos. Pop superstar Rhianna, Hot 97's DJ Cypha Sounds, DJ Stretch Armstrong and many more  celebrities came out to see Natalie, Tifa , Timberlee, Sean Paul, Leftside and several other dancehall acts perform their hits to a completely sold out crowd. "I really really loved the vibe of the whole trip, I got crazy stuff done in a short time and most importantly met with some major figures in the overseas music industry," Natalie said. "It gives me even more strength and motivation to push my music and my style to the world."

Natalie returned to Jamaica continuing her blistering schedule. In the last few days, she has almost completed voicing and started mixing her debut riddim "Firestorm". She has just recorded a new song for producer Skatta's Hindu riddim and is making preparations for two new music videos.

It looks like we may be in for a Stormy summer if this dancehall diva continues this pace.

Check out Natalie's newest songs and shows at myspace.com/nataliestorm