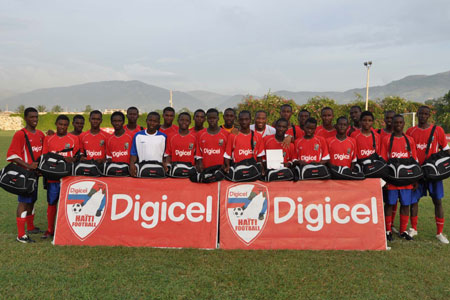 Digicel Kick Start Clinics Head Coach, John Barnes noted that the talent on display at the Kick Start Clinics in Haiti was on par with what he saw in Jamaica and Suriname - but this time, it was player on the opposing side that particularly caught his attention.

“This is the first time that there is one player in the opposition team who will be in serious contention for the chance to go to Sunderland AFC. As I’ve said in the past, it’s good to empower the opposition as well. In this case, that particular player was probably the best player on the pitch,”

The international football legend complimented the local Federation and Digicel staff for the professional way in which they handled proceedings despite the challenges they faced in terms of poor weather and the last minute change of venue. “The Kick Start Clinic was short, but good.”

Watch out for interviews with four of the twenty-five players who participated as well as Haiti Football Federation President Yves John-Bart as they share their views on their experiences at the 2009 Digicel Kick Start Clinics.