A Spankin' New Video Will Introduce The World To YOU 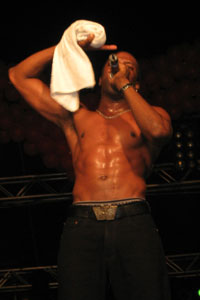 Smack in the center of the summer, one of the year’s hottest music videos will be released and will make its way into the homes of thousands, if not millions around the Caribbean and the world. Fan club members of www.shurwaynewinchester.com will see it first on Wednesday, June 17th though, guaranteeing a web induced buzz early on, and certainly meandering onward to the streets of Port-of-Spain, Arima, San Fernando and just about everywhere else on planet Earth.

Sounds a bit far fetched you think? Well, according to the urban crew- yes, the crew around town who’s been systematically shaping the ‘new’ Shurwayne Winchester and his spanking new band Y.O.U., the images that’ll come to life to match the words of 2009’s hit track, You, are out of this world, fitting the man who will be known in 2010 as the epiphany of Trinidad and Tobago Carnival.

Another E-Zone Entertainment/Militainment production, the video was produced by Lisa Wickham and directed by S*Felix and Lisa Wickham. The team has been working with Winchester since 2005.

“We made a concerted effort to create, style and build an on-screen persona and image for Shurwayne that could transcend to his stage performance, from his super hero character in ‘Dead or Alive,’ to the romantic image in ‘Don’t Stop,’ to his sexy on screen image in ‘Make It Yours.’ ‘You’ (Energy) merges the two, since it brings out the super action hero image and combines it with him as a sex symbol in the teaser at the end, ” explained the directors.

“In addition, the idea behind the video was to create a concept for a Carnival song that had a big cinematic feel and texture and demonstrated that soca videos don’t always have to be about jump and wave images.”

Both Whickam and Felix agree that Shurwayne is adventurous, adding that as an entertainer, he’s always willing to push the envelope and above all, has absolute trust in the team. The directors of this cutting edge new video, both say they feel proud of the work done, as the team was able to introduce new, unconventional shooting styles and angles as well as never before seen within the industry, on- screen special effects make-up.

As with everything he touches, Shurwayne Winchester’s band is quickly becoming an explosive unit of strength, vibes and energy and with a recently completed state of the art building that houses a studio and band room, the members of Y.O.U. all agree that nothing else but life is required to produce the hits for Carnival 2010 and beyond. Armed with his worldly online slogan, Go Green, Shurwayne Winchester is revolutionising the game, making things not just good, but damn good with every hit he brings.